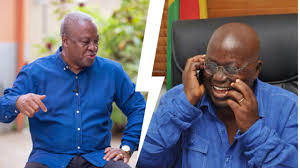 Illegal Mining: President Akufo-Addo Should Have Resigned By Now – Mahama

The former President  of Ghana John Dramani Mahama says if  the current President Nana Addo Dankwa Akufo-Addo were in another jurisdiction, he would have simply resigned.

“If we were in some other jurisdiction, he would have resigned by now. By his word, he put his presidency on the line,” Mr Mahama observed in an exclusive interview with TV3‘s Alfred Ocansey on Monday, September 12, monitored by TodayGhanaMedia.com.

The former president noted that all the current illegal mining activities are being conducted on concessions owned by executives of the New Patriotic Party (NPP).

This he stresses is making it difficult for the president to fight illegal mining activities.

President Nana Addo Dankwa Akufo-Addo in 2017 put his presidency on the line in stating his resolve to fight the galamsey menace.

“I have said in Cabinet, and perhaps this is the first time I am making this public that I am prepared to put my presidency on the line on this matter,” he told some chiefs at a workshop in July of that year.

But Mr Mahama said the president lacks the political will to fight the canker.

Illegal mining: President @NAkufoAddo should have resigned by now. All the NPP party executives have concessions and are doing illegal mining in forest reserves. #3NewsGH #TV3GH pic.twitter.com/y3GBWRWq9g Previous Ghanaian Music Star Black Sherif Grabs 2022 BET Hip-Hop Nomination For Ghana
Next Oti Chiefs To Akufo-Addo: Past Governments Failed Us But You Are Different; Thank You

Spread the love The President of Ghana,  Nana Akufo-Addo has predicted that the country is …