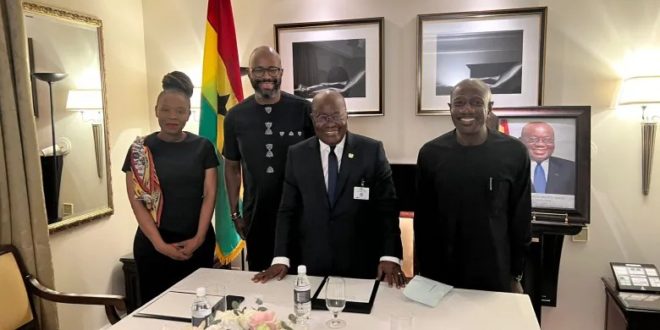 The President of the Republic, Nana Addo Dankwa Akufo-Addo, has made a personal appeal to the Pan-African telecommunications giant, MTN, through the Group President and Chief Executive of the MTN Group, Ralph Tendai Mupita, to support the senior national football team, Black Stars, in their 2022 World Cup Campaign, coming off in Qatar in November 2022.

The President made the call when he received Ralph Tendai Mupita and his delegation at his hotel in New York on Tuesday, 20th September 2022.

The President used the courtesy call to support efforts by the Ministry of Youth & Sports, which has engaged MTN to become a headline sponsor of the national football team’s campaign in Qatar.

The MTN delegation called on President Akufo-Addo, who is attending the 77th United Nations General Assembly (UNGA) in New York City, to establish MTN’s commitment to Ghana and its willingness to continue supporting Ghana’s development, especially in the roll out of education. Also in attendance was Ghana’s Minister of Education, Yaw Osei Adutwum.

MTN told the President about its keen interest in participating in any future spectrum auction for 5G infrastructure for faster and more efficient internet service in Ghana.

President Akufo-Addo, while engaging the high-powered MTN delegation, suggested to the leading mobile service provider in Ghana, to play an active role in supporting Ghana’s efforts, including the mobilisation of supporters.

The organisation was very active in the 2010 World Cup, when Ghana missed out on a semi finals slot in South Africa through a final minute penalty miss. MTN was a major sponsor of that World Cup in 2010.

The President is hopeful that this Black Stars squad has what it takes to make Ghana and the entire African continent proud in Qatar, by going beyond what any African nation has been able to achieve in the World Cup, which remains a quarter final position.

Akufo-Addo noted that the people of Ghana love their football and the attention of the country is going to turn to the Black Stars during the period of the 2022 World Cup fiesta in Qatar.

In response, the MTN head assured the President that his team is already fully engaged in the sponsorship discussions and he expects a successful conclusion to that.

The three MTN executives recalled being at the stadium when Asamoah Gyan missed that crucial penalty in the 2010 World Cup quarter finals match with Uruguay and expressed optimism that Ghana and the other four African nations will make a very good showing in Qatar.

Ghana earned her spot in the World Cup in Qatar on 29 March 2022, having battled Nigeria to a 1-1 draw in the second leg of their play-off. Ghana’s lone goal in Nigeria came at the 10-minute mark from Thomas Partey.

This will be the fourth World Cup of the Black Stars in five attempts, having missed out on Russia 2018. Ghana is in Group H with Portugal, Uruguay, and South Korea.

MTN was established in South Africa at the dawn of democracy in 1994 as a leader in transformation. Since then, the company has grown by investing in sophisticated communication infrastructure, developing new technologies and by harnessing the talents of its diverse people.

The MTN Group is currently a multinational telecommunications group, with its core operations in 21 countries in Africa and the Middle East. As at the end of December 2008 MTN recorded more than 90,700,000 subscribers worldwide.