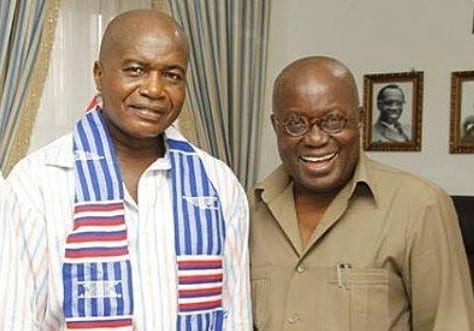 Kofi Ameyaw: Stephen Ntim Has A Good Relationship With Akufo-Addo; Dismiss Anything Otherwise

The Communication and Brands Director for the Stephen Ntim Campaign, Kofi Ameyaw, has debunked claims that the National Chairman hopeful for the New Patriotic Party (NPP) has a bad personal relations with President Akufo-Addo.

Disproving the allegations on Movement In the Morning Political Show with Kwaku Dawuro he said, “the then candidate of the NPP, Nana Addo Dankwa Akufo-Addo made Stephen Ntim the Chairman of the Settler Communities Project of the 2016 electioneering campaign which he indefatigably executed his role so well that it resulted not only in the NPP significantly increasing its parliamentary seats but also winning several seats the party had never won” he said.

He added, “Stephen Ntim was made the board chair for Land’s Commissions by the same person some Ghanaians say he has a bad relationship with. It’s never true that their smiles to each other is just for the cameras. He will never think of doing that; he wants to be the National Chairman to unify the party to bring everyone on deck in ensuring the NPP wins the 2024 elections. Therefore, let me reiterate that Stephen Ntim has a very cordial relationship with the current president- anything otherwise should be dismissed”, he said adding that Mr. Ntim will ensure the President’s legacy is protected.

Pledging to unite the party if Mr. Ntim is elected the National Chairman, Kofi Ameyaw said, “the experienced politician is ready to resolve all disputes that will arise out of the party’s internal contests”.

Mr. Ameyaw was quick to add that if Stephen Ntim doesn’t become the National Chairman of the party, it will be extremely difficult for the NPP to win power.

“We want to defy all odds and make history by retaining the seat for the third time. In Ghana’s election history any political party winning an election for the second time wins with a slight margin over its closest contender because there’s always apathy within the party. When Ntim becomes the Chairman of the party, he will ensure there’s unity. Every individual who has lost an internal election should realize that Mr. Ntim still serves the party wholeheartedly even after five(5) failed attempts. He has never disappointed the party,” he stressed.

He however assured all supporters of Mr. Ntim that every vote will be counted during the national delegate conference due to some past experiences urging delegates to consider his track record.