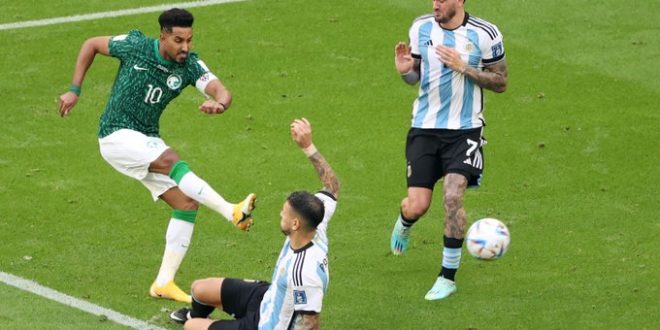 Argentina handed a huge shock after falling to a painful 1-2 loss to Saudi Arabia at the Lusail Stadium in Group C opener.

The two time champions right from onset, took the game at the Falcons which eventually yielded them a penalty on the 6th minute after Leandro Paredes was fouled in the box by Saud Abdulhamid- a call which was affirmed after VAR checks.

Saudi Arabia were given a dangerous free kick but Salman Alfaraj’s delivery was dealt with, the subsequent attempt couldn’t count.

Lionel Messi scored again few minutes after his first but wouldn’t stand as he was in an offside position bf receiving the pass.

On the 34th minute, Another Lautaro Martinez goal after receiving a good ball from Messi but was once again flagged off for offside.

Another Saudi Arabia counter break initiated by Feras Albrikan but the end cross crafted in was claimed comfortably by Emiliano Martinez.

Alejandro Papu Gomez with a great work to put Lautaro Martinez through and made no mistake by plotting into the net but was subsequently cancelled.

The Albiceleste were all over and dominated every aspect of the first half but only jumped into the lead courtesy a lot 15-yards strike.

Back from recess, another blistering return for Scaloni’s men as Di Maria is put through with a decent ball but was stopped by the opposition backline.

Saudi Arabia just four minutes from the break, got themselves back on level. Abdulelah Ali Maliki played a decent pass to Al Buraikan who sets up Al-Shehri to struck into the bottom corner to draw his side back on level.

Astonishingly, the Green Falcons scored again on the 54th minute thanks to Al Dawsari’s beautiful curler from outside the box. The first time they were going in front in the game.

Lionel Messi’s free kick at a very good position, chose himself for the kick but fired wide as they continue to chase for equalizer after the 80th minute mark.

Lionel Messi pushed again with a towering header from Di Maria’s cross but was gathered calmly by Mohammed Alowais.

It ended 1-2 after full time. Big win for Saudi Arabia in the end.