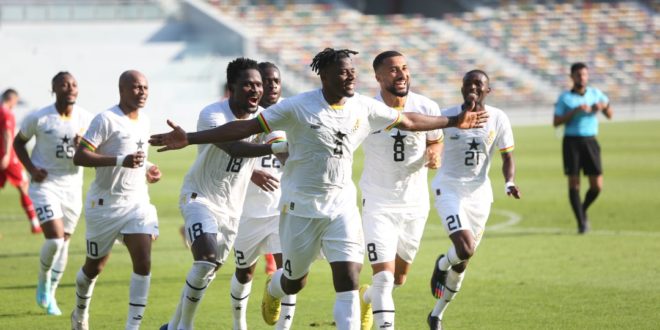 Ghana exhibit their best performance under Otto Addo arguably, to edge out Switzerland by an emphatic 2-0 at the Baniyas Club Stadium in an international friendly.

The Red Crosses started well and made their first goal incursion after Breel Embolo’s ground cross got tipped by Ati Zigi and subsequently cleared by Jordan Ayew.

Switzerland with their second incursion in just five minutes from kickoff after Embolo once again sent in a teaser to locate Ruben Vargas at far post but his near post effort missed by inches.

Ghana’s first chance on goal on the 11th minute, debutant Salis Abdul Samed played skipper Andre Ayew through with a decent mirror pass but was flagged for an offside.

Another beautiful Ghana build up, Elisha picked up Tariq Lamptey on the right- who followed up with a cross but was cleared by Fabian Schär.

See also  Open Letter To GFA : The Black Stars Is In Crisis

Daniel Afriyie Barnieh was brought down in the box by Valencia’s Comart but the referee waved play on.

Ghana had our first shot on target after 23 minutes when Jordan Ayew wins a tussle with Zakaria to sent a hit but was straight at throat of Yann Sommer.

Inaki Williams on the 30th minute connected at a very close range from Jordan’s corner kick but went wide.

Mohammed Salisu came so close to scoring after tapping from 15 yards from a corner kick but went wide. That should have gone in.

In the second half, Noah Okafor received a good pass from Shaqiri but his strike missed out by inches. That was close

See also  PHOTOS: Former Black Stars Player Hospitalised With Severe Injuries After Accident In The US

On the 56th minute, Inaki Williams got the best out of Eray Comart and sent in a cross to pick up two of his teammates in the box but couldn’t make the connection.

Black Stars on a break, ball fell on Antoine Semenyo who made a good turn but his shot was blocked for corner kick.

The Swiss backline struggled to clear the delivery and Mohammed Salisu pounced on to head into the net to give Ghana the lead on the 69th minute.

🇬🇭Antoine Semenyo scores his first in Ghana colors and a second goal for the Black Stars .

The Black Stars will face Portugal next Thursday, November 24, in their opening fixture of the 2022 FIFA World Cup.