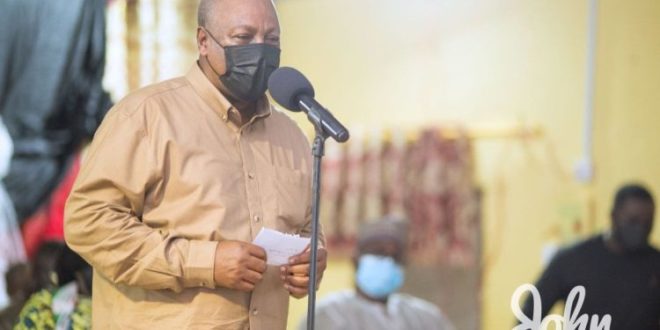 The former President John Dramani Mahama says the Nana Akufo-Addo-led administration has failed in the fight against corruption.

His comment comes on the back of infractions cited in the 2021 Auditor General’s Report.

The former President, John Dramani Mahama said the country is confronted with major challenges and needs to eschew greed to foster development.

He noted that self-centredness has been eroded despite the strong foundations laid by our forefathers.

“The NPP government has completely lost control of the fight against corruption. President Akufo-Addo in his inaugural address promised to protect the purse. Today, that public purse cannot be found. Revelations in the Auditor General report for 2021 are only a microcosm of the seeming institutionalization of corruption under this administration.”

Speaking at the grand durbar to mark the climax of the Asogli Yam Festival in Ho, the former President called for a concerted effort in dealing with the canker.

“I am using this festival to draw attention to this important national issue that requires the support of all citizens. Economic difficulties in the country are unbearable. Cost of living has increased significantly because of rising inflation. Prices are changing in the market every day, and this makes it difficult for the ordinary Ghanaian to survive.”

The most recent Corruption Perception Index released by Transparency International showed that Ghana has failed to make significant progress in its fight against corruption.

Between 2020 and 2021, Ghana maintained its score of 43, which is still below the average, with countries scoring higher viewed as less corrupt and those with the least scores being more corrupt.

As far as fighting corruption is concerned, fewer than 30 percent of Ghanaians believe that people can report corruption without fear of retaliation, which is a decline of four percentage points compared to 2019.

Among key public institutions, the Ghana Armed Forces, religious leaders, traditional leaders, and the courts are the most trusted.

In general, trust in institutions declined between 2019 and 2022, with trust in the presidency declining by 25 percentage points.

Spread the love Child marriage has been one of the unending challenges confronting many communities, …