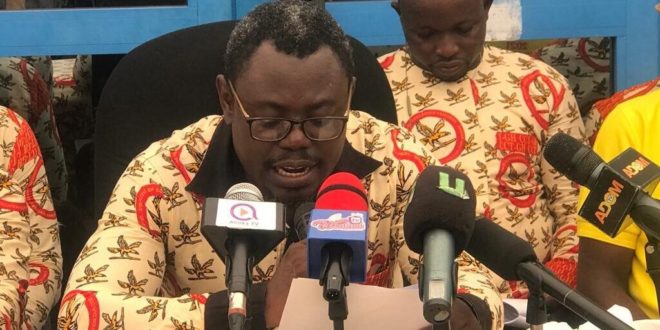 Concerned Teachers React To The Payment Of 15% CoLA By CAGD

President of the Coalition of Concerned Teachers, King Ali Awudu , has reacted to the payment of the Cost of Living Allowance (CoLA) by the Controller and Accountant General’s Department (CAGD).

He told Alfred Ocansey on the Sunrise show on 3FM, Tuesday August 30 that the current rate of inflation is not the same when the labour unions agreed on the 15 per cent CoLA.

Inflation rate for the month of July 2022 was 31.7 per cent, the Ghana Statistical Service (GSS) announced on Wednesday August 10.

This is up from the 29.8 per cent recorded in June.

King Ali said “As at the time we were negotiating inflation was 20 something and now it has shot up.”

15% COLA: As at the time we were negotiating inflation was 20 something and now it has shot up.

An amount of ¢485 million has been paid as CoLA by the CAGD.

The CAGD made the announcement in a statement on Monday August 29.

“Pursuant to the approval given by the Ministry of Finance on 1st August 2022, following the Agreement signed between Government and Organized Labour on 14th July 2022, the Controller and Accountant-General has paid the Cost of Living Allowance (COLA) to workers in Public Service Institutions.

“The COLA which represents fifteen percent (15%) of the 2022 basic salary was paid for the months of July and August. The total amount paid for COLA for the two months is Four Hundred and Eighty-Five Million Ghana Cedis (GH¢485,000,000.00),” the statement said.

The Government and Organised Labour ealier reached a consensus over the cost of living allowance workers were been demanding since May.

15% COLA: We have consistently asked them to do segregation of public sector pay and they have refused.

At a crunch meeting held on Thursday, July 14, the two parties and their various representatives agreed on a 15 percent CoLA.

Organised Labour had initially demanded a 20 percent allowance, for which some worker unions proceeded on strike.

But after deliberations, the workers have agreed to accept 15 percent as COLA for the next few months.

This is expected to cushion them in the face of the rising cost of living in the country.