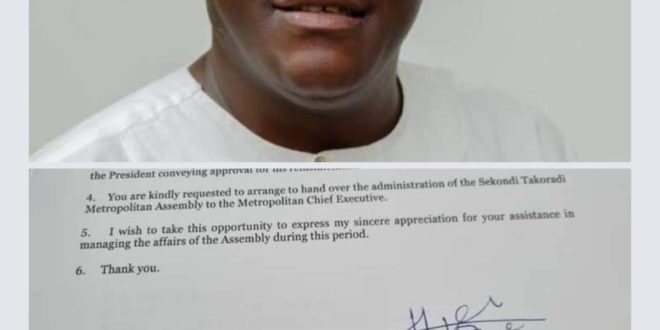 The President Nana Addo Dankwa Akufo-Addo has reinstated the suspended mayor of the Sekondi-Takoradi, Abdul Mumin Issah after altercation with a police officer that led to his suspension.

A letter dated August 30, 2022, signed by the Minister of local Government, Decentralisation and Rural Development, Mr Daniel Botwe stated that the President has accepted the recommendations made by the Western Regional Coordinating Council after an inquiry into the conduct of the MCE.

“The President, Nana Addo Dankwa Akufo-Addo has therefore given his approval for the reinstatement of Mr Issah, who was suspended in February this year [2022].

The president through the Ministry of Local Government, Decentralization and Rural Development in a press statement issued on Friday February 4, 2022 suspended Mr. Abdul Mumin Issah from office as the Mayor of STMA following an inquiry into his alleged encounter with the police officer on February 3, at a Police check point in Kwesimintsim.

Mr. Mumin was arrested on Thursday February 3 and charged on three counts of assault of a public officer, offensive conduct conducive to breaches of the peace, and disturbing the peace in a public place contrary to sections 205, 207, and 298, respectively, of the Criminal and Other Offences Act of 1960, Act 29.

On Friday morning, he was arraigned before the Takoradi Circuit Court “A”.

He pleaded not guilty to all the three charges levelled against him and was granted GHC 100, 000 self-recognizance bail with three sureties.

Background
It would be recalled that on Thursday February 3, 2022 there was an altercation between the mayor and a police officer, one Andrew Sarfo near the Kwesimintsim cemetery Police snap check point.

The mayor was captured on tape which went viral on social media heard threatening the said police officer with a transfer to Enchi.

The government appointee was also heard describing the officer as “ugly” and said he would have beaten him to death when the officer challenged him for driving after he had attempted to ignored them at the check point.

The officer was also heard challenging the authority of the STMA boss to disrespect and threatening him.