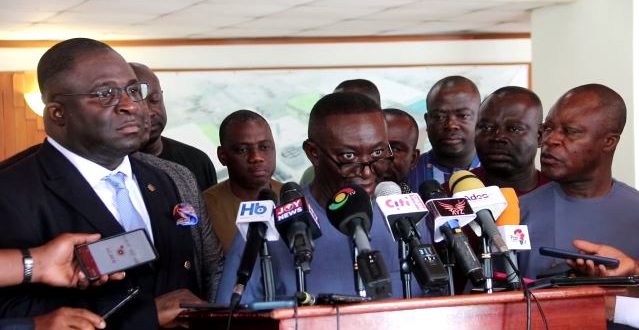 Parliamentarians in the Majority side pushing for the removal of the Finance Minister, Ken Ofori-Atta, have reportedly boycotted the 2023 budget debate in Parliament on Tuesday.

Most of the seats in the majority side of the House were vacated as a way of expressing their dissatisfaction about the minister still in office.

Per information gathered by the DGN Online, the Finance Minister, Ken Ofori-Atta who was supposed to move the motion for the commencement of the debate is out of jurisdiction and was not in parliament before the start of the debate, prompting the rebel MPs to leave the house.

This among other things provoked the already aggrieved Majority Caucus to stay out of the debate.

However, some of the MPs who happen to be ministers and leadership in parliament stayed to debate the budget.

However, the MPs on Majority side wete seen busily fidgeting with their phones without paying much attention to the minister.

Spokesperson for the aggrieved MPs, Andy Appiah-Kubi, speaking on Peace FM’s Kokokroo said “It’s not only the budget that we will boycott, we will no longer be a part of any government business. That is the position we have taken. It starts from now,”

He stressed that “Ofori-Atta is not the only one with knowledge, he must go. I can assure you, we will not backtrack our decision. If the President refuses to sack him, it’s up to him.”

Mr. Appiah-Kubi therefore called on Mr. Ofori-Atta to resign honourably if the President is reluctant to sack him.

“Without fear or any contradiction, we, the 98 Majority MPs do not support the ongoing vote of censure. That is an approach by the Minority. All that we want is for the President to sack Ofori- Atta,” the Asante Akim North legislator fumed.

The Minister is currently being investigated by an Ad-hoc committee for financial recklessness, conflict of interest, gross mismanagement of the economy among other claims.

Members of Parliament started on November 29, 2022, the debate on the 2023 budget statement presented by Ken Ofori-Atta last week.

Excerpts of the budget have been met with some criticisms over the impact it will have on their businesses and livelihood.

Next year’s budget is strategically designed by government to focus on strategies to restore and stabilise the macroeconomy, build resilience, and promote inclusive growth and value creation.

The budget statement featured updates on Ghana’s engagement with the International Monetary Fund for a $3 billion programme, the macro-fiscal performance of the economy; the YouStart initiative under the Ghana CARES Programme; climate action strategies; fiscal measures and debt management strategies to ensure fiscal and debt sustainability and promote growth.

Among the new policies proposed in the budget, which are likely to be implemented under an IMF programme, will be a freeze on public sector employment and new tax measures as the government moves to cut down expenditure and boost revenue.