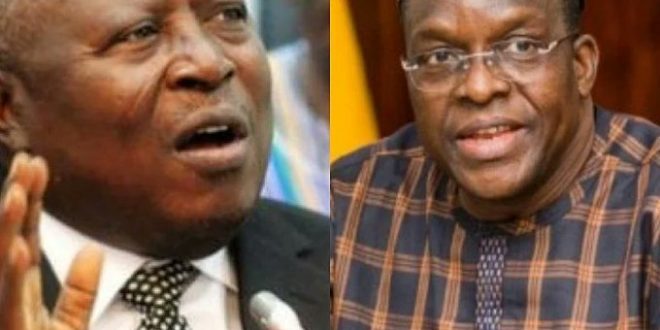 Martin Amidu has taken on Speaker of Parliament Alban Bagbin over recent comments Bagbin made on the floor of Parliament relative to his experience in Parliamentary democracy.

Martin Amidu accused the Speaker of behaving somewhat like a village chief who was treating Ghanaians like his subject.

The former Special Prosecutor, also admnished Bagbin to stay off boasting about his credentials and to allow colleagues and others who have known him over time to do so.

Amidu’s views were contained in an epistle titled; ‘Games in Parliament – The Speaker and the Minority’s Motion of Censure.’

It read in part: “Mr. Alban Sumana Kingsford Bagbin needs to be told to stop talking down on Ghanaians as though he is a village chief and we, his subjects.

“No humble, learned, erudite, and experienced person will ever seek to silence his critics in a constitutional democracy by telling them that: ‘In all humility, please note that there is deep thought in whatever I do. Don’t underrate my knowledge, skills, experience, and expertise in Parliamentary practice and procedure.’

“It is for the public or one’s professional peer group, to determine one’s level of knowledge, skills, experience, and expertise and not for one to subjectively assert them and trumpet his competences to the world,” the statement added.

Amidu also pointed to Justice D. F. Annan, the first speaker of the current Republic, to empasize how someone who has not been an MP distinguished himself as a Speaker.

He charged Bagbin to take a lead from his predecessors and maintain his role as an umpire in the affairs of the House and stop acting like a transactional member of the House.

“The conduct of Mr. Bagbin in the processes leading up to the passage of the 2022 Budget Statement and subsequent Appropriation Act, 2022 and the current motion of censure filed by the Minority Caucus of Parliament against the Minister for Finance, Ken Ofori-Atta vindicate the assertion that Mr. Bagbin behaves more as a transactional Member of Parliament than the Speaker of Parliament as an umpire,” Martin Amidu argued.