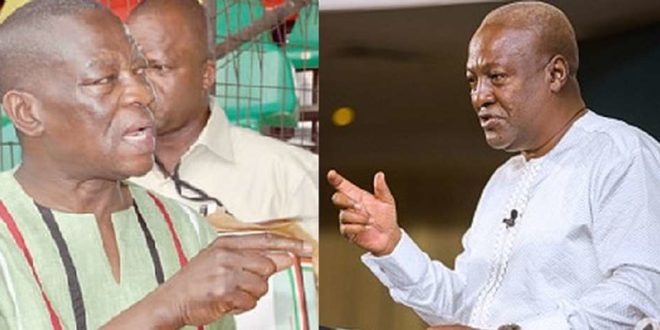 I Will Bite You If ……. – Former NDC Organiser Tells People Rooting For Mahama’s Comeback In 2024 [Listen]

A former National Organiser of the opposition National Democratic Congress (NDC), Yaw Boateng Gyan, has said it is wrong for party executives to throw their weight behind one person when polls have not yet been opened.

Speaking on Asempa FM’s Ekosii Sen Tuesday, he cautioned that it is important they work together to build a solid and formidable party instead of jumping from one station to another supporting one person for a flagbearership position.

“Our party laws do not allow party executives to keep mentioning one person and declare their support for just one person. That should not be the focus. Our focus must be to come on board and work together to build our party.

“We all have to sit down well and build the structures to make us solid and not who leads now when the party has not even opened polls.”

Stating he was not against the persons campaigning for Mr Mahama, he, however, warned that he will not take it lightly with anyone who also dares to suppress him over his views.

“I won’t prevent anyone who wants Mahama to be elected as flagbeaerer and so I don’t expect someone to also stop me from voicing out my views on who should lead. I won’t tolerate such things, if you are entitled to your views, I am also entitled to mine, if you try to stop me, I will be forced to bite you because the party is a democratic one and so let’s allow each and everyone to speak out. Whatever the masses say, that is what’s we will accept but for now let’s not mention names,” he stressed.

With the NDC expected to elect its flagbearer for the 2024 elections in November this year, in accordance with the roadmap for its internal elections, one name that has popped up is Dr Kwabena Duffuor, a former Minister of Finance, who is reportedly prepared to contest the position of the flag bearer with former President John Mahama.