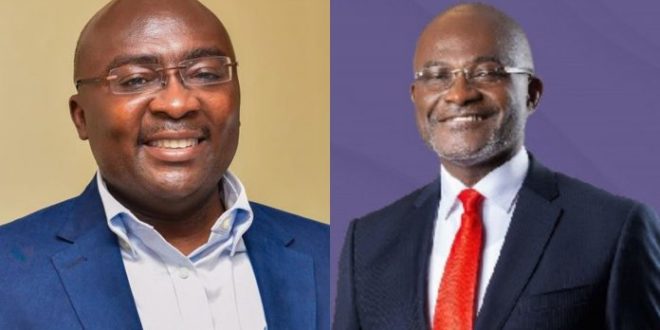 The political feud that arose between the camps of Kennedy Ohene Agyapong, Assin Central MP and Vice President Bawumia have been resolved.

The duo who are both aspiring to be flagbearers for the NPP started on a rather slippery which they have both realised could mar the party’s ‘breaking the 8’ agenda.

The development escalated to levels where Ken Agyapong trolled the weaken economic capacities of the Vice President, questioning why he has allowed himself to be bullied by the Finance Minister, amid blames of making him lose a lot of money due to the plummeting Cedi resulting from his poor execution of the very ‘economic theories’ he has been lecturing.

But Dr. Bawumia, considering the import of similar encounter between then candidate Akufo-Addo and Alan Kyerematen –who is still in the flagbearer race –has called for a ceasefire.

A release issued from the camp of Ken Agyapong detailing how the two camps conferred for unity in the party’s upcoming primaries found below:

As the latent competition for the flagbearership of the New Patriotic Party (NPP) gets keen, persons purporting to be speaking for some of the aspirants, have started making utterances that are divisive. Some have even gone to the extent of playing the tribal card against their potential opponents, a development many find destructive and inimical to the unity of the party.

Few days ago, the Member of Parliament (MP) for Assin Central on his usual tours to help energise the base of the NPP, travelled to visit some constituencies in the North East Region among others. Before then, Mr. Anthony Abayifa Karbo, former NPP MP for Lawra, was on record to have met some members of the party in the Volta Region and asked them not to vote for any Akan in the next presidential primaries of NPP. It should be noted that, Mr. Karbo for sometime now, has been speaking for the Vice President on his (Dr. Bawumia) presidential ambition and is therefore within his inner circle.

In addition to this, Mohammed Baatima Samba, Northern Regional Chairman of the NPP and Fuseini Nurideen, North-East Regional Chairman of the NPP had also instructed all constituency executives in their respective regions not to meet Hon. Kennedy Agyapong for any discussion. This the Hon. Agyapong upon getting the information, did not take kindly to and warned the said chairmen and their likes, to learn from history to avoid the mistakes that always take the party to opposition.

According to him, tribal campaign is a recipe for the party’s disaster and anyone who presses it thinking that he is doing so to support an aspirant, should know they are sending the party to opposition.

The Assin Central legislator who is also one of the major financiers of the NPP told the people gathered that, if Dr. Bawumia should become flagbearer, he will definitely need his (Hon. Agyapong) support to win as president. In the same way, if he also wins, he will need Dr. Bawumia’s support. This he said is what should be the the thinking of anyone who loves the party and wants it to break the 8.

Sensing the potential danger involved in the issue Mr. Agyapong has raised, the Vice President Dr. Mahamudu Bawumia has acted in a bid to foil any latent happening which has the potential to create rancour and disunity by sending a delegation to meet Hon. Kennedy Agyapong to resolve the difference.

On the evening of Wednesday, November 30, 2022 at the residence of Hon. Agyapong, Movenpick, a 3-member delegation detailed by the veep, conferred with him on the matter of ensuring decent campaign for the race.

The team, led by Fred Oware (campaign manager for team Bawumia), visited Kennedy Ohene Agyapong to ask him to forgive any happening or utterances that might have infringed on his person by people who are part of Dr. Bawumia’s team.

Hon. K.T. Hammond, who has been a link and sometimes a mediator between Mr. Agyapong and other entities due to his close friendship and a commandant of the Assin Central M.P., was also there to ensure peaceful resolution of the differences.

Each of the people present, promised to work with the support of one another to ensure unity in order to secure a third term victory for the NPP.