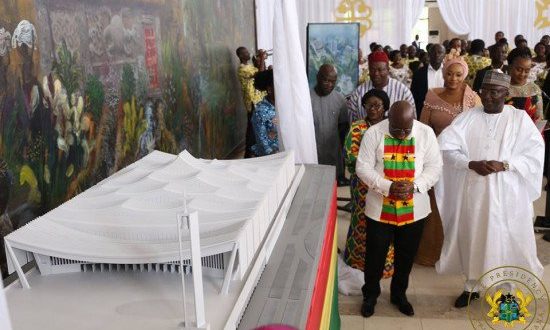 It appears the current inadequacy of funds which has stalled the National Cathedral’s construction is not enough to cause the President to back down.

President Akufo-Addo has reiterated his commitment to see the project through by hook or crook.

This comes almost two weeks after news broke that work on the structure was suspended by the Secretariat’s Executive over lack of funds to finance the construction.

Speaking at the Pentecost International Worship Centre (PIWC) in Accra on Sunday, President Akufo-Addo said he will not let the plan go unimplemented.

“We will build the National Cathedral by all means. We will finish the construction before I’ll say what I have to say about it,” he affirmed to the cheers from a section of the gathering.

He however fell short of indicating how the additional funds will be raised to facilitate the project.

The much-talked-about project resurfaced in the media space earlier this year after controversies surrounding the financing of the project heightened.

The Finance Minister had announced that an amount of ¢25 million had been released to the project consultants in May 2022.

This was the second time money tagged as “seed money” was being released except that in the first instance the amount involved was $25million and it was said to have been paid in November 2020.

Despite the issuance of about three press statements, many were still unclear in their minds about the financing arrangements for the construction of the Cathedral which had been described by the President as a “priority of priorities”.

However, the Executive Director of the National Cathedral Secretariat, Dr Opoku-Mensah in August urged Ghanaians to support the cause.

According to him, the ambition can only be actualised if the populace unites and contribute to the building of the edifice.

“The money might be big in terms of volume but if indeed we have 21 million Christians and a million can give us ₵100 a month for a year, we can easily complete this in time.

“I refuse to believe that we can’t get a million Ghanaians out of the 21 million Christians to support this. I still have faith in the Ghanaian and I am confident that we will do this,” he said.

The building of the Cathedral fulfils a pledge President Akufo-Addo revealed he made to God before winning the 2016 elections.

In 2019, the Finance Minister, Ken Ofori-Atta, said the construction of the National Cathedral is estimated to cost over $100 million.

It has since been amended to $340 million.

The government has already demolished all structures on the proposed site to construct the National Cathedral at Ridge in Accra, and work is progressing.

It is also scheduled to be commissioned on March 6, 2024.

The 5,000-seater auditorium project will also bequeath to the country a gracious national park for all Ghanaians, bring new skills, technology and jobs, and act as a beacon to national, regional and international tourists.