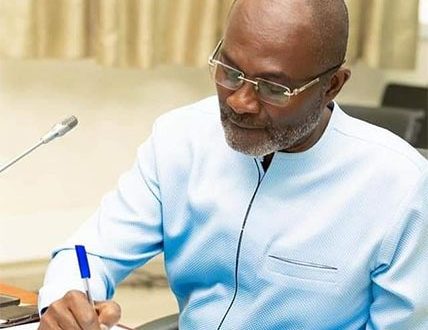 The Secretary of the Asogli State Council, Stephen Tetteh has confirmed that indeed the Assin North Member of Parliament (MP), Kennedy Agyapong was invited to witness the sitting in state of the overlord of Asogli, Togbe Afede XIV.

According to him, the invitation was a result of an administrative lapse on his part, following the Council’s earlier disapproval of a request to invite Mr. Agyapong.

The confirmation was indicated in a press statement issued by the Asogli State Council on Monday, September 12, 2022, a copy to TodayGhanaMedia.com and signed by the Secretary, Stephen Tetteh.

This interesting turnaround seems to affirm the notion by some members of the public that the Asogli Palace may have intentionally invited Mr. Agyapong to embarrass him as revenge for comments made against the Agbogbomefia of the Asogli State, Togbe Afede XIV.

On Friday, September 9, 2022, Togbe Afede together with his subchiefs and elders rejected the homage and gifts of Mr. Agyapong in the full glare of the public when the Agbogbomefia sat in state to receive well-wishers and gifts ahead of the grand durbar on Saturday, September 10, 2022.
Togbe Afede’s conduct has been hailed by some while others have described it as unfortunate and a missed opportunity to reconcile and foster unity; as is one of the major purposes of festivals in the country.

See also  Victoria Hamah To Critics: How Are You Faring After My Dismissal?

Following the humiliating incident, an invitation letter popped up to confirm that indeed Mr. Agyapong was invited. However, persons close to the Palace had suggested it could not be true.

Only for the State Secretary, to come out on Monday, September 12, 2022, to confirm that indeed the MP was invited with the excuse that it was an administrative lapse.

As a justification for the humiliating incident, Mr. Stephen went ahead to detail the headlines and dates that Mr. Agyapong made some unpalatable comments against Togbe Afede. Some of which include “Togbe Afede is a shameless opportunist,” April 24, 2022. “I declare war in the country,” April 18, 2012. “Togbe Afede is corrupt, he supervised fraudulent withdrawal of 31 million cedis from NIB,” November 7, 2018.

The rest are “Togbe Afede is ethnocentric, and an NDC stooge, his name can never intimidate me,” November 8, 2018. “Even the President cannot stop me from chasing Togbe Afede out as NIB Board Chairman,” November 13, 2018.

Many have had a course to wonder why Togbe Afede mixes business and politics with his Chieftaincy duties, in that his public statements can be very confusing as to whether he speaks as a Chief or a businessman.

In the Ghanaian culture, Chiefs are revered and caution is key when talking about them, however the same cannot be said about statements targeted at government appointees, particularly those involved in state finances and agencies.

Previous No Gov’t Under The Fourth Republic Has Constructed More Roads Than NPP – Dr. Bawumia
Next ‘We Will Build The National Cathedral By All Means’ – Nana Addo [video]