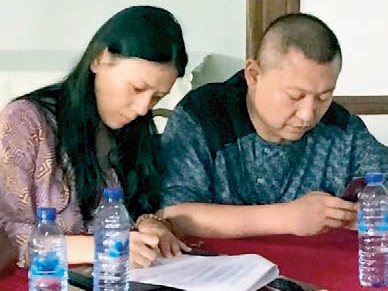 More Details  are emerging about how a Chinese woman, Wan Shanghong alias Magee, conspired with her friend, Liu Yang, to allegedly steal 50 per cent shares in the Big Stone Mining Company Limited at Bogoso in the Western Region.

Investigations revealed that Magee, who was employed as a translator at the company, dubiously took advantage on the deficiency of the Chinese owner of the company in the English language to allegedly forge documents and register 50 per cent of shares in the name of Liu Yang.

Reliable sources said between 2016 and 2019, the owner transferred about US$800,000 from China to Magee and Liu Yang for the establishment of the company, which they allegedly misappropriated.

Apart from her deals at the Big Stone Mining Company, Magee, who claimed to have political connections and contacts in the police, had also been engaged in various deals, which landed her in police station but, she was always left off the hook.

Checks indicated that she has been emboldened in her acts by the support she is receiving from some state officials.

Her alleged criminal activities have also been reported to the Chinese Embassy in Ghana.

The questionable activities of Magee have led to four Chinese organisations petitioning the Attorney General and Minister of Justice to ensure that the legal tussle over the shareholding rights of Big Stone Mining Company is properly handled.

They insisted that the recent dubious takeover of the factory was in clear disregard for the rule of laws in Ghana, and added that they would apply the laws of Ghana to ensure the protection of legitimate Chinese businesses in the country.

Furthermore, the organisations said they were appalled by the blatant disregard for the rule of law demonstrated by Magee and the police.

They urged the Ghanaian judicial system to protect the basic rights of Chinese companies that are doing legitimate business in Ghana.

The Ghana Chinese Chamber of Commerce, in their petition, accused Magee of using her political connections at the Jubilee House to collude with the police to infringe on the laws of Ghana in the matter involving Big Stone Mining Company.

“The local judicial system should protect the basic rights of our Chinese companies and the personal safety of Chinese employees as well as the employment needs of the local employees,” it said.

The Fujian Chamber of Commerce – China, also in their petition, said Ghana is a country of laws and, therefore, nobody should be allowed to take the laws into their own hands.

Their petition was copied to the Chief Justice and the Inspector General of Police.

In their petition, the Hebei Chamber of Commerce said Big Stone Mining Company Limited, which is legally registered in Ghana, has been law abiding.

“We are aware of the legal matter concerning the shareholding rights of the Big Stone Mining Company Limited, and we are delighted that, the management of the company has, in the face of all the provocations, decided to use the laws of Ghana to battle their case,” the petition signed by the President of the Chamber, Zhu Bunguang said.

GHACHIFA, in a statement signed by its Secretary General, Benjamin Anyagre, said the association had been following developments at Big Stone Mining Company and believes that the Ghanaian judicial system should protect expatriates doing legal business in the country.

Expressing disgust at how police illegally occupied the factory at Bogoso, the association said although the police have withdrawn, upon some legal interventions, it was important that due process was allowed to settle the shareholding litigation which is before court.

Meanwhile, police in Bogoso have mounted a search for Magee, for allegedly stealing cash and other valuables at Big Stone Mining Company.

A staff of the company filed a complaint with the police on September 9, 2022 against Maggie, who also works with the company.

According to the complainant, on August 18, 2022, at about 10am, Magee went to the factory with armed policemen, dragged all the workers out and took control over the factory.

Maggie also allegedly broke into the offices and replaced the doors with new locks, and made away with various items and cash.