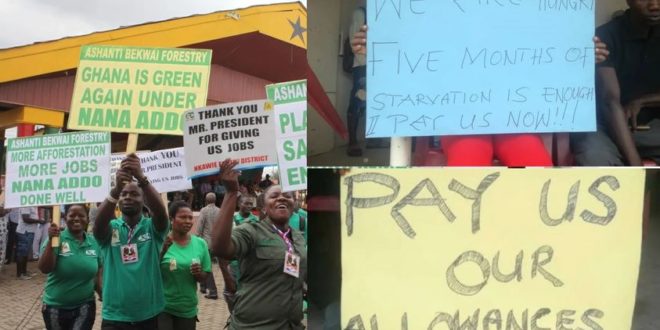 Beneficiaries of the Youth in Afforestation program have reiterated the need for the government to pay them their eight-month-old allowances.

Members of the group embarked on an indefinite strike on August 1 as part of efforts to demand the payment of their locked-up funds.

They say, although they have held several meetings with stakeholders to demand their arrears, their issues have not yet been addressed.

National Secretary of the group, Ernestina Nyarko, has been narrating to Citi News the severe hardship some of the beneficiaries have been subjected to as a result of the situation.

“From January till now, we have not been paid. It is really sad and very difficult for all of us. I can say on record that, they walk long distances to get to work. People are also being ejected from their houses because they can’t pay rent”, she decried.

The Youth in Afforestation programme was launched in 2018 in line with the government’s commitment to reforestation, forest rehabilitation and forest protection activities.

There are about 100,000 beneficiaries of the programme across the country.

The Forestry Commission had assured that allowances in arrears of beneficiaries of the youth in afforestation programme will be paid.

But the workers keep complaining that their allowances had not been paid. According to them, some of their members are even owed up to ten months of arrears.

The group had insisted that its members who are made up of about 45,000 people will also lay down their tools to drum home their demands.