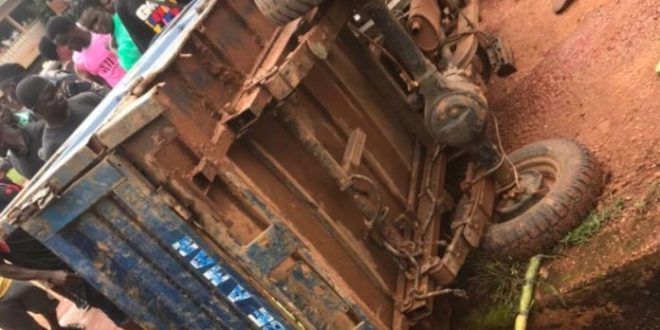 Two Dead, Others injured In A Tricycle Accident At Sefwi Afariwa

Two persons have died in a tricycle accident at Afariwa in the Bodi District of the Western North Region.

The tricycle which carried plantain and sugarcane had four passengers on board including the rider.

In his attempt to take a sharp curve towards the Juaboso route, the tricycle slipped off the bitumen road which had become slippery due to the drizzle which was taking place at the time.

The woman, Adwoa Twenewaa who is in her mid forties, died at the hospital around 3:30 pm, leaving the rider and one 8-year-old girl who are currently in stable condition according to Sowah.

It is also reported that the mother of the young girl boarded ‘pragya’ to the market and handed over the daughter to the rider who is a niece to him.

The tricycle with the plantain and sugarcane are currently at the Juaboso Police Station.