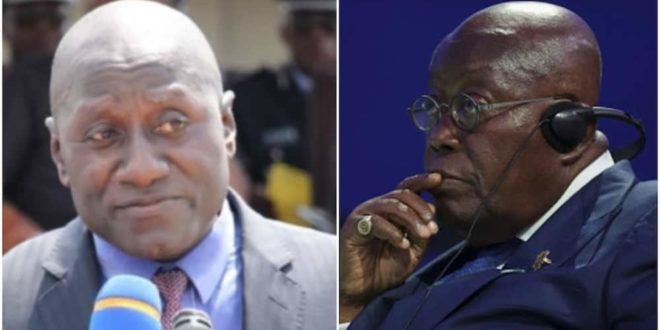 The Commissioner of the Customs Division of the Ghana Revenue Authority (GRA), Colonel Kwadwo Damoah (rtd), has handed over following the expiration of his contract.

The acting Deputy commissioner (preventive service), Seidu Iddrisu Iddisah has been directed to act in his stead, effective 26 August 2022.

“The President thanks you for your service to the state and wishes you well in your future endeavours,” Nana Bediatuo Asante, the secretary to the President said in a letter addressed to Damoah.
Issues with Special Prosecutor

Meanwhile, Damoah has said he is fully cooperating with the Office of the Special Prosecutor (OSP) in investigations into some aspects of the operations of the division.

In an interview with the Daily Graphic in Accra last Friday on developments that had culminated in the investigations, Col Damoah said he had no problem with the investigations, saying everything he had done as the head of the Customs Division was lawful and reasonable within the circumstances.

“The Special Prosecutor has the right to investigate, but I am confident that at the end of the day, the truth will stand and my integrity will remain intact. I have not contravened any laws of the land and, therefore, I have nothing to fear,” he said.
Specific investigations

“I have been cooperating fully with the OSP. I responded to an OSP invitation on February 16 this year in connection with the Labianca issue. Currently, the office has asked us to produce all documents related to the granting of discounts by September 30.

“Additionally, the OSP has directed that we produce documents on auctions by the same September 30. We are gathering all the documents in order to meet the deadline given,” he said.

The Customs Division of the GRA has been mentioned in two cases being investigated by the OSP.

One of the cases involves Labianca Company Limited, from whom the OSP has already recovered GH₵1,074, 627.15 in unpaid import duties.

A statement from the office said the Commissioner of the Customs Division of the GRA was expected to produce some important documentation to aid the probe on or before September 30, 2022.
Work unaffected

Responding to how the developments had affected his work, as well as the operations of the Customs Division, Col Damoah said there had not been any adverse effect on his work and that of the division.

“The investigations have not had any negative impact on my work because I have nothing to hide. Let me say that these investigations will not stop me from continuing to do what is within the ambit of the law.

“I have told my officers that we have to exceed our revenue target by 25 per cent and we are working towards that, and I won’t be intimidated,” he said.

In all that, he said, it was also refreshing that he had the full backing of his officers, who believed in the work he was doing for Customs and the nation.

He provided figures to support how seriously the division was working to exceed its revenue target of GH¢25.6 billion.

As of August 20, actual revenue collected was GH¢12.49 billion, and Col Damoah said based on projections, there was every indication that the target would be exceeded.

Showing the Daily Graphic documents to prove the open and diligent work his outfit had done, the Customs Commissioner said Labianca met all the legal requirements for a mark down of between five and 10 per cent benchmark values.

He said acting through the Deputy Commissioner (Operations) of the Customs Division, Joseph Adu-Kyei, he, as head of the division, granted the mark down to Labianca based on the volumes of imports the company had done.

Col Damoah said the legal bases for the granting of the concession were embodied in Section 12 of the Customs Act 2015 (Act 8910), the World Trade Organisation Valuation Agreement, Chapter 9 of the Revised Kyoto Convention and World Customs Council and World Trade Organisation principles, guidelines and trading conventions provided in the Revised Kyoto Convention for Fair Trade Practices.

He indicated that the practice of granting concessions to companies with very high volumes of imports for specific products was not new in the operations of the Customs Division.

He explained that previous commissioners of Customs, including his predecessor, had granted concessions to some companies based on their volumes of imports and, therefore, Labianca was not the first to receive such an offer.
Auction legal

On the auctioning of vehicles, he explained that the investigations were premised on a petition submitted to the OSP by some individuals whose vehicles were auctioned after they had failed to meet the statutory deadline to pay the required duties.

“These individuals petitioned the OSP that they imported some vehicles which they were unable to clear; that the vehicles were confiscated to the state and auctioned at values far below what they were to pay as customs duties,” he said.

“I don’t take delight in auctioning. The fact is that the laws are clear on the confiscation of goods; that is, if you are unable to clear after six months, and in some cases one year, the goods are confiscated to the state and auctioned,” he added.

Col Damoah said currently there were about 500 vehicles due for auctioning, but given the OSP’s directive, any planned auctioning had been put on hold until the investigations were completed.