Breaking News
Home / Sports / Enoch Morrison: ‘It Has Always Been My Desire To Play For Asante Kotoko’ 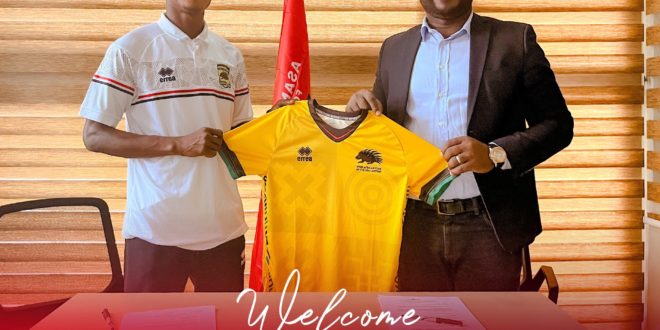 Enoch Morrison: ‘It Has Always Been My Desire To Play For Asante Kotoko’

Newly-signed Asante Kotoko midfielder Enoch Morrison has expressed delight after joining Asante Kotoko and added it has always been his desire.

The 22 year old was earlier yesterday announced as the Porcupine Warriors eight arrival in the ongoing transfer window, having signed until 2025.

✍️ We are delighted to announce the signing of midfielder
𝐄𝐍𝐎𝐂𝐇 𝐌𝐎𝐑𝐑𝐈𝐒𝐎𝐍 🔥🔥🔥from King Faisal on a three-year deal.

Morrison is rated among the best attacking midfielders in the Ghana Premier League following his exploits at King Faisal in the last two seasons.

He managed to score seven goals and provided two assists in his 21 outings for the ‘Insha Allah’ outfit during the 2021/22 season.

Speaking on Akoma FM, the ex- King Faisal playmaker has disclosed that, it has been his wish to join Kotoko and are one of the best in the country. He said;

“Kotoko is a very good team. Almost all the players are my friends. we play, live together and do other things together.”

“They are very good well organized club. One of the best in the country. I have received numerous calls when it was speculated that Kotoko were pursuing me.”

“I love the two top teams in the country (Kotoko and Hearts) but I prefer playing for Kotoko because it’s always been my heart desire.”