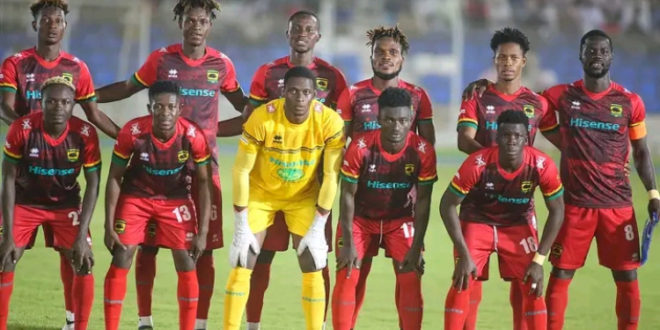 Asante Kotoko legend and former Executive Board Chairman, Samuel Opoku Nti has urged his former club to go all out for nothing but a victory against RC Kadiogo on Monday and also assured them of his full support.

The Porcupine Warriors will play as guests to the Burkinabé champions in Benin in the first leg of the 2022/23 CAF Champions League first preliminary round.
The game which was originally scheduled to come off in Cote D’Ivoire but has been moved to Benin due to the unavailability of the Yamousoukro Sports Stadium, all due to the fact that, RC Kadiogo couldn’t use any of the facilities in their country since it doesn’t meet the standard at the moment.

The team left the shores of Ghana to Cotonou by road on Thursday, morning from Accra and arrived few days ago and have already held training sessions at the match venue for early acclimatization.

Speaking to Akoma FM, Opoku Nti, who was an integral member of their 1983 Champions League winning squad, has told the current set of players to give out their all and that, they have the support of the entire Ashanti Kingdom. He said;

“Every player who will be selected for the game should maintain a hundred percent focus and give full concentration until the referee ends the game.”

“The entire Asanteman and Kotoko supporters are behind them so they should give their maximum best if not a win at least a draw game is what I’m expecting.”

“I urge all fans to continue praying for them so they return as victorious.” He concluded

Previous Khalifa Maikano To Dr. Bawumia: You And The NPP Gov’t Have Been Faithful To Us; We Shall Support You
Next #BetPawaGPLwk1: Dreams FC Silence Goldstars In Bibiani