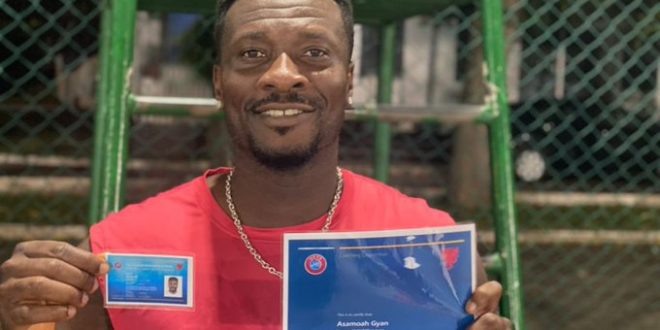 Legend Asamoah Gyan is now closer to coaching after displaying an image of his Union of European Football Associations (Uefa) B coaching license.

In June this year, the ex-Sunderland man embarked on a trip to Wales for his coaching course.

Your new UEFA License Coach is here ❤️⚽️, thanks to all who made it possible & a special one to the Wales FA , this is just the beginning . January 2023 Coaching Clinic loading 🙏🏿 pic.twitter.com/ultjaj6VwV

Gyan was in class for the six-day programme organized by the Football Association of Wales.

It was a residential course for those who had experience of playing or coaching within the professional game.

Gyan excelled and after five months, he has been awarded for his hard work, meaning he is qualified to take on a coaching job.

However, the 36-year-old is yet to hang his boots despite being inactive for more than a year after picking up an injury for Ghana Premier League side Legon Cities FC.

See also  This Is No Match; We Will Overturn The Scoreline And Qualify Over Real Bamako – Hearts Of Oak Coach

His activity cost him a place in Ghana’s squad for the upcoming FIFA World Cup finals in Qatar.

The former Al Ain striker has not hidden his intention to coach at the highest level.