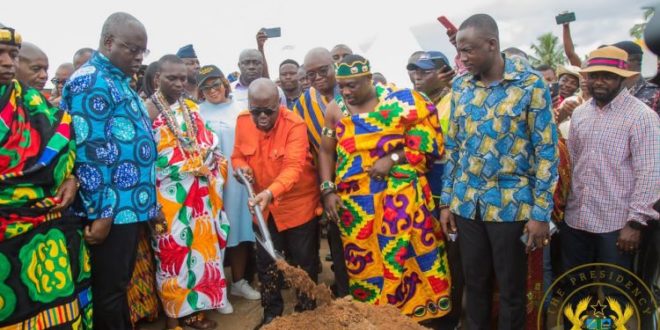 “In honour of the late Harona Esseku, I have instructed the Minister for Roads and Highways to commence work on the construction of the Akoti Junction to Senya Beraku Road.”

These were the words of President Nana Addo Dankwa Akufo-Addo, on Friday, 2nd September 2022, when he commissioned the APPEB Cyplinder Manufacturing Company Ltd., in Chochoe in the Awutu Senya West Constituency in the Central Region.

In paying tribute to the late Harona Esseku, the President asked the gathering at the ceremony to observe “a minute’s silence in honour of the memory of a stalwart of the New Patriotic Party, Harona Esseku, who was a former National Chairman of the party and a former Minister for Transport in Prime Minister Kofi Abrefa Busia’s Progress Party Government of the 2nd Republic.”

He also told the gathering that the Director of Communications at the Presidency, Eugene Arhin, “has done a very good job in lobbying persistently for this road to be constructed, just as he did for the Bawjiase-Kasoa road, and I assure you that it will be completed before 2024.”

President Akufo-Addo continued, “It is public knowledge that he has intentions of contesting on the ticket of the NPP in 2024. If he is successful in the NPP parliamentary primaries, Nananom, I am confident that he will do an excellent job as Member of Parliament for you, and I appeal to all of you to support him if and when that time comes. You have seen for yourselves what he is doing for Awutu Senya West.”

Prior to the commissioning of the cylinder manufacturing plant, the President cut the sod for the official commencement of construction of the Bawjiase-Kasoa road.

The Bawjiase-Kasoa Road expected to be completed in two years, this critical road project will link the Central region to the southern part of the Eastern Region, and ease traffic off the Kasoa-Accra-Nsawam stretch.

Chiefs and people of the area have over the years made countless appeals to successive governments for the construction of that stretch.

Solely financed by the Government of Ghana, the project is being undertaken by General Construction Limited.

When completed, the road will boost commercial activities along the route, which is widely known as an industrial and agrarian area for citrus and poultry farmers.