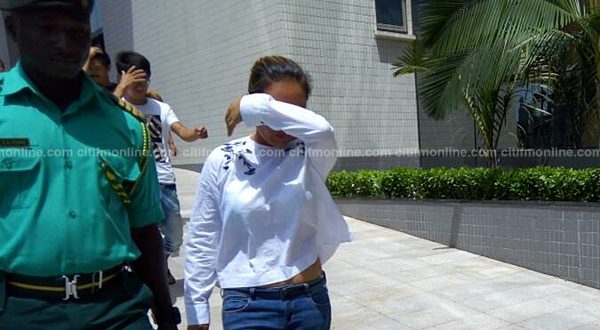 An investigator with the Immigration Service Supt. David Essien has revealed that the mother of Chinese national Aisha Huang is a director of a licensed mining company.

The company operates in the Bepotenten area in the Ashanti Region.

Ms Huang who is accused of engaging in illegal mining is alleged to have mentioned the company as a business entity she rents out mining equipment to.

Investigations are, however, said to have revealed that her mother had leased out a portion of the company’s concession to her but she failed to pay for it.

This was revealed during the cross-examination of Supt. Essien by lawyers for Aisha Huang led by Nkrabeah Effah Dartey.

Mr Dartey had questioned the witness on whether he had independently carried out any investigation to determine whether Aisha Huang was indeed engaged in illegal mining.

The witness shared the following details with the court

Effah Dartey: As far as you are concerned, you don’t have specific points of fact against the accused on mining operations. Correct?

Witness: No my lord. I have facts about the accused person’s involvement in mining. My lord when I encountered her, we took statements from her. In those two statements, she mentioned that she rents excavator machines to Egyiri mining company which has a mining concession at Bepotenten.

My lord investigations followed and as a result, I was tasked to invite one of the directors of Egyiri mining who is in the person of Coxton Ahinkan Egyiri. The said director honoured our invitation and a caution statement was taken from him on 19th May 2017.

In the said statement, Mr Egyiri said he has known the accused for three years and the accused used to mine on a concession that shares a boundary with their small-scale mining concession. Mr Egyiri further indicated that their company, Egyiri mining company has not entered into any agreement of renting excavator machines as claimed by the accused.

Rather, the accused person’s mother who is also a director of the company leased three acres of their concession for the accused to mine out of which the accused has failed to pay as promised.

When the media publication came to my attention, we continued with our investigations and mounted surveillance on the accused. Until our Obuasi team intercepted four employees of the accused.

When the arresting officers brought the employees, the accompanying report indicated that they were sent to the site to mine for the accused. According to the report, it was Gao Jin Chen who mentioned this to our Obuasi team.

Even before the arrival of our Obuasi team, the accused surfaced to enquire whether her employees who she had sent to Bepotenten had arrived. When she realised they were not in. She left. When I intervened the intercepted employees, their leader Gao Jin Chen who could speak broken English, told me the accused sent them to mine and that their passports were with her:

I was tasked to invite the accused. She came to the office and provided two passports of the four employees, together with her passports. They were referred to our Accra HQ for further investigations

This information and evidence confirm that the accused is involved in illegal mining activities. And that was why she faced trial in 2018.

Effah Dartey: All that you have said about Egyir mining and your actions are not captured in your witness statement.

Witness: The Egyir caution statement has been submitted to the accused. And I believe it has been disclosed.

Effah Dartey: I suggest to you that you are not a truthful witness.

Witness: My lord it’s a lie. I am speaking the truth.