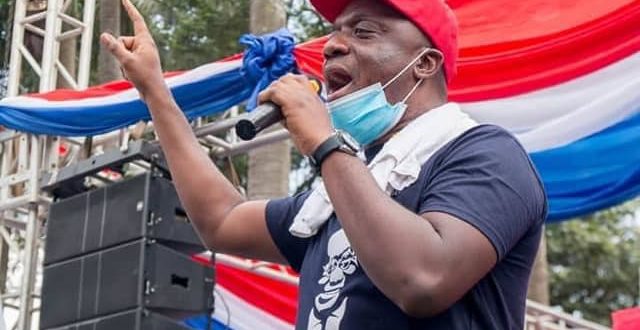 The new General Secretary of the New Patriotic Party (NPP), Justin Frimpong Kodua, has asked colleague executives to desist from pitching camp with any of the Parliamentary and flagbearer hopefuls in the party’s upcoming parliamentary and presidential primaries.

He urged executives of the ruling New Patriotic Party (NPP) to remain neutral in its upcoming Presidential and parliamentary election to enable the party to stay united towards the 2024 general election.

“So my clarion call to all party executives, be they Constituency Executives, Electoral Area Coordinators, Polling Station Executives, they should be neutral, if they are neutral and at the end of the politics there is a victor then we can all rally behind the winners and then market them” he explained.

Speaking  in an interview with “Ade Akye Abia” morning show host  Kwame Nkrumah Tikese on Accra-based Okay Fm monitored by TodayGhanaMedia.com, JFK as he is popularly known indicated that the onus has fallen on the new crop of executives to successfully steer the affairs of the party including conducting the primaries.

He stated that how they as new leaders conduct the primaries will determine if the party will remain united or divided.

While stressing the need for executives to remain neutral, he vowed to crack the whip if anyone is found on the wrong side of the law.

“Everybody must see himself as under the law because as we move forward, we will organize Parliamentary and Presidential primaries. If we don’t conduct ourselves well, there will be division in the party at the end.

“As General Secretary of the New Patriotic Party, I stand here and say that for our Parliamentary and Presidential primaries I won’t meddle in it. I plead with my other colleague executives and regional chairmen that we should be ‘referees’ in the ensuing primaries and at the end whichever candidate emerges victorious, we will market him.

“If we don’t do it like that and we take sides, it will worry the party. Same happened in 2008. When we were going for the elections, the party was divided. So going forward, when we outline the laws and you don’t follow them, the law will deal with you,” Justin Frimpong Kodua said.

The Chief Executive Officer of the Youth Employment Agency (YEA), unseated incumbent John Boadu after garnering 2,857 votes compared to the latter who obtained 2,524 votes in the General Secretary race.

Justin Frimpong Kodua said that with determination, vision and planning he was able to work as the Youth Employment Agency (YEA) to become the longest serving CEO in the history of the Agency.

According to Mr Justin Kodua, he will use the same agenda to become most successful General Secretary the NPP has ever had.

He assure to take advice from the grassroots, the elders and experience people in the party as well.

Many have described the conference as preparatory grounds for the party as it readies itself to ‘break the 8’.

Meanwhile, the party is set to elect a flagbearer to lead it into the 2024 elections next year. Already some names which have come up strongly are Vice President Dr. Mahamudu Bawumia and Trade and Industry Minister, Alan Kyerematen

Previous Article: High Cost of Rent in Ghana; Who is behind the Steering Wheel?
Next Tescon Members Should Advise Themselves And Join Tein – Kofi Amoabeng Writes