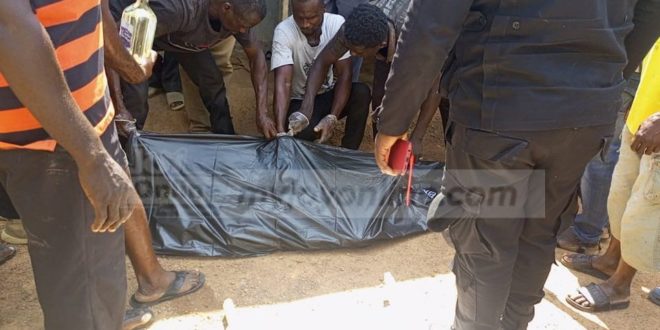 A father of two believed to be in his 30s, Kwabena Ahi has beaten his wife, Armah Patience to death at Apente, a farming community in the Western North Region.

Reports indicate that the couple engaged in a fight leading to the unfortunate development.

Antwi Ofori, a resident of the Apente community explained that the couple had been fighting frequently in recent times.

Ahi after finding out his wife was dead, also took in a poisonous chemical suspected to be a weedicide to kill himself.

However, he was found helpless in the bushes and subsequently taken to the Juaboso Government Hospital for treatment.

The police from Sehwi Bodi visited the scene and the body was taken to the Juaboso Government Hospital for further investigation.

See also  2 Nigerians Who Traveled To Ghana For Robbery Jailed For 40 Years By The Kasoa Ofaakor Circuit Court.

The couple has two children, a 4-year-old boy and a 1-year-old girl.