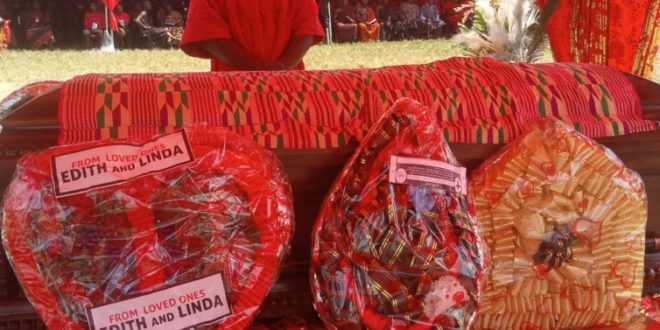 The mortal remains of Francis Kofi Okesu, who until his demise was the Krachi East Municipal Chief Executive, has been laid to rest at his residence at Dambai Community One in the Oti Region.

Family, friends and sympathizers from far and near paid their last respects as the body was laid in state at the Lapaz Park at Dambai.

Tributes poured in for the late Okesu from political parties and institutions, with many describing him as a loving and gentle personality, with an unbridled passion for his work.

Mr Joshua Gmayenaam Makubu, the Oti Regional Minister, described him as a hardworking man who became an inspiration for both the young and old in the New Patriotic Party (NPP) and the Krachi East Municipality in general.

“As young as he was, he worked hard for the municipality with the aim of creating an enabling environment for job creation and development,” he said.

Mr Makubu said the late Mr Okesu was always punctual to work and functions, and that must be learnt by all.

The NPP, in a tribute, said it had lost a strong pillar and a unifier, who did not believe in the creation of personality camps within the party.

“Okesu was passionate about the various developmental projects President Nana Addo Dankwa Akufo-Addo has earmarked since assuming office on January 7, 2017.”

The NPP would see to the execution of those projects to create jobs for the youth as a memorial to the late MCE.

Dignitaries at the funeral included Mr Dan Kweku Botwe, the Minister of Local Government and Rural Development, who described the late Okesu as irreplaceable.

He, however, assured the municipality of the Ministry’s readiness to accelerate development, adding that the good works and legacy of the late MCE would forever be remembered by the party and the nation.

Mr Botwe expressed his condolences to the wife, children and the entire bereaved family and prayed that God keeps his soul in perfect peace.