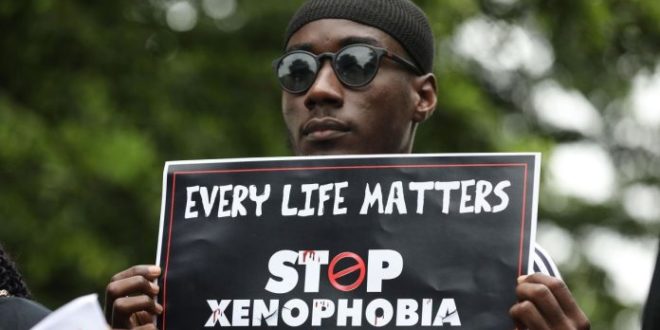 Xenophobic attacks are said to have resurfaced again in South Africa. Non-citizens are living in fear currently, including Ghanaians.

A Ghanaian citizen living in South Africa, Owura Kofi has alleged that government officials in South Africa stoke the flames of xenophobia anytime they go on political campaigns and rallies, blaming the hardships in the country on non-citizens.

He claimed that the Ghana High Commission in South Africa was not forthcoming with support for Ghanaians who were under persecution in the country.

His claims come after the Ghana High Commission in Pretoria, South Africa, warned Ghanaians in the country of a possible xenophobic attack this month.

“Kindly be advised that lately, there have been increasing protests by various organised groups in South Africa protesting against the presence of foreigners in the country,” a statement said.

See also  How Safe Is It To Drink Rainwater?

But speaking on GTV’s Breakfast show with Thelma Thackie, Owura disclosed that after the most recent xenophobic attacks in which their shops were looted, no support was given to registered and non-registered Ghanaian citizens living in South Africa.

He, therefore, appealed for more proactive measures to be taken to safeguard non-citizens doing business and other engagements in South Africa.

After Apartheid in the early 1940s, xenophobic attacks started in South Africa around 2008, according to reports, human rights experts have urged private and public actors to honour their commitments to human rights and racial justice, and take a firm stand against the racist and xenophobic violence that continues in the country.

UN experts have been in official communication with the South African Government to address these allegations and clarify its obligations under international law. The recent rape of eight women who were filming a music video when they were set upon by dozens of men, robbed and raped at a mine dump in Krugersdorp, west of Johannesburg, reignited xenophobic sentiment in South Africa.

The incident triggered wide public outrage. In Krugersdorp and nearby communities, mobs helped police in raids to identify and arrest more than 100 suspects. Some of them are undocumented migrants from Lesotho and other neighboring countries.

In some cases of mob attacks on foreigners, some are assaulted, others stripped naked and paraded through streets. The residents blame undocumented migrants for crimes in the area, with some openly vowing to take the law into their own hands.