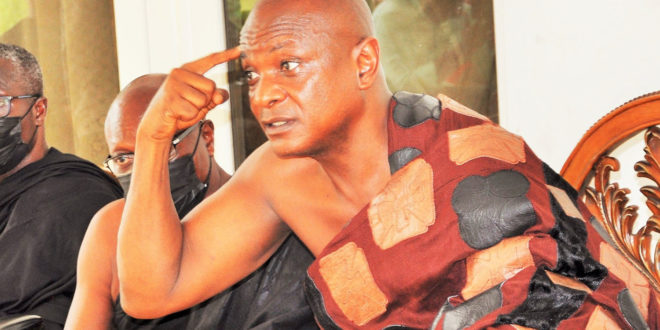 The Member of Parliament for Assin Central and NPP Presidential Candidate hopeful , Kennedy Ohene Agyapong sent a gift to Ho on Friday for Togbe Afede XIV, the Agbogbomefia of the Asogli State as part of the ongoing Yam Festival and it was rejected.

This year’s yam festival of the Chiefs and people of Asogli State is being climaxed this weekend under the distinguished patronage of Togbe Afede XIV.

The festival started on August 6, 2022 and is expected to end on Sunday, September 11.

The one-month festival seeks to highlight unity, reconciliation, stocktaking and development and is also a platform for the annual re-union with the ancestors and the re-affirmation of allegiance by all chiefs and their subjects in the Asogli State to the Agbogbome Stool.

There was a sitting in State at the Asogli State Palace Forecourt on Friday.

Mr Kennedy Agyapong was there in person in Ho on Friday to pay homage.

He sent along some gifts and the gift was rejected at the durbar ground.

Some sub chiefs, serving as intermediaries to receive the gift on behalf of Togbe Afede rejected it and asked him to take it away.

Their reason was that, Mr Agyapong has allegedly been speaking negatively and using unkind words on Togbe Afede.

A video depicting Mr Agyapong on the durbar grounds have some voices in the background shouting “away”.

The gift including cartons of bottled water, were packed back into a vehicle that brought them.

See also  POS To Gov’t: The Public Health Concerns of Marijuana; Grant Amnesty To Prisoners Of Drug Use

It was only the gift that was rejected, he said.

A State Grand Durbar at the Jubilee Park in Ho has been scheduled for Saturday, September 10, 2022.