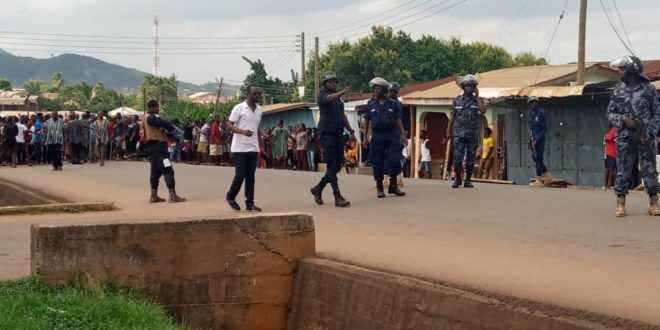 A presidential staffer at the Office of the President, Mr Robert Tetteyfio Adjase, has condemned the brutalities meted out to residents of Nuaso Old Town in the Lower Manya Krobo Municipality of the Eastern Region over the installation of prepaid metres by the Electricity Company of Ghana.

Mr Tetteyfio Adjase, who is the Head of Assets at the Jubilee House in Accra, said the military personnel stepped beyond their boundaries in the line of duty.

The encounter led to the hospitalisation of some victims while others sustained varying degrees of injuries from gunshots and beatings among others.

The presidential staffer said the actions of the military personnel must be condemned despite the resistance the ECG officers met from the “stubborn” residents.

See also  Victoria Hamah To Critics: How Are You Faring After My Dismissal?

“We knew some of the residents proved stubborn but to the extent that military personnel shot live bullets against the residents, for that one I condemned that act,” Mr Tetteyfio stated when he visited the victims who were on admission at the St. Martins De Porres Hospital.

He added: “When I came with the media team, I went to the hospital; that’s St. Martin’s De Porres Hospital at Agormanya, where I saw the wounds myself and the doctors here confirmed that it was gunshot wounds.”

He, therefore, urged the military personnel to put an end to their brutalities for peace to prevail.