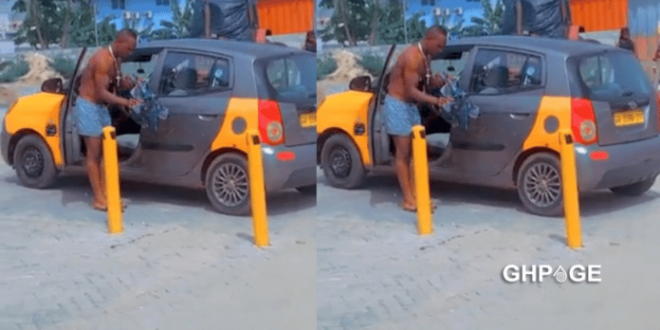 According to the irate Taxi driver who requested for his number to be restored in order to make and receive calls, although he hasn’t duly registered his sim but that doesn’t mean MTN should bar him from making and receiving calls.

After exchanging fierce words with some of the customer care attendants who refused re-activate his number for him, he moved into his car and brought out a bottle of Schnapp.

He undressed in plain sight and later crossed to the other part of the road to invoke curses on both the customer care attendants and MTN as a whole.

The National Communications Authority Ghana (NCA) has communicated to the general public that from September 5, 2022, unregistered sim cards will be blocked for 2 days each till September ending.

According to the NCA, mobile network subscribers in Ghana who have still not re-registered their SIM cards and have done only stage one re-registration will start receiving punitive actions including the blocking of all their outgoing calls and data services for 48 hours (2 days) per week.

Below is the full statement from NCA