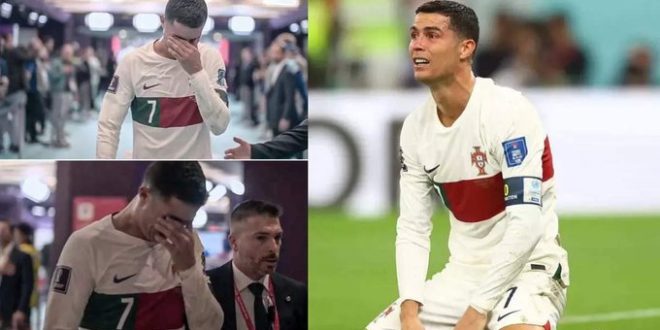 Cristiano Ronaldo was  left the field crying like a newborn baby after Portugal crashed out of the ongoing 2022 FIFA World Cup following its defeat to Morocco.

Ronaldo, who came on in the second half, could not help his side from exiting the tournament despite the Europeans dominating the game.

After the game, Ronaldo, who is currently clubless after parting ways with Manchester United, was full of tears as he walked down the tunnel in disappointment. It is the first time Portugal has lost at the quarter-finals stage of the World Cup.

Ronaldo crying to left me up by Rihanna pic.twitter.com/1wAFI8Ttad

#Morocco beat #Portugal! & the Portuguese coach had his star player #Ronaldo sitting on the bench during the 1st half! & someone was there to capture him crying when he left the field. Damn. I feel for him. #WorldCup2022 #WorldCup pic.twitter.com/HkUlYILFGS

Even in defeat Ronaldo tried to make it all about himself when he left the field crying on his own. I’ve got news for the second best player of his generation, it’s not about you, it’s all about Morocco today!!! #BBCFootball

Ronaldo, the world's richest and world number one footballer, left the field crying today. Did he lack wealth? Did he lack fame? No, not at all, all these things are with this star, but the tears in his eyes are only because of not being able to make the country a champion. pic.twitter.com/Nif7akRhgv

I’m not happy Ronaldo left the WC stage for the last time, crying. 2022 has to be a year to forget for him. I think it’s time he sat back and make a decision 🙄🙄🥹