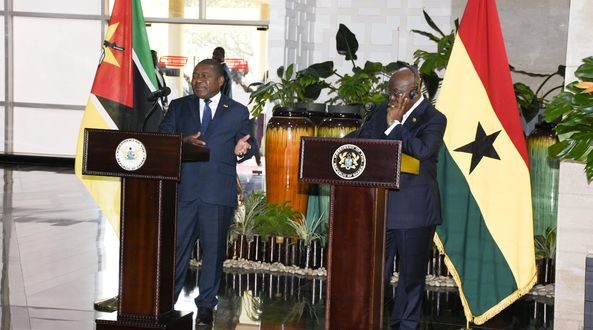 President Filipe Jacinto Calls For Cooperation Between Ghana And Mozambique

The President for Mozambique, Mr Filipe Jacinto Nyusi has called for Cooperation between Ghana and Mozambique.
Calling for the unity for African countries, he rallied for   the book written by the late President of Ghana, Dr Kwame Nkrumah “Africa Unite.”

He revealed that more than two thousand people are gone missing in his country as a cause of terrorism.

Mr Filipe Jacinto Nyusi said the only way to stop terrorism is by join efforts of countries.

See also  FMEA Awards To Air Live On Kumawood Tv Tonight: How To Watch The show, Who Is Nominated, Performers & Special Guests

He added  that, agreement between both countries will promote sustainable management in economic resources such as Agriculture, Gold,oil and gas.

He showed appreciation to President Akufo-Addo and the late UN Secretary General, Kofi Annan for their   solidarity to support Mozambique at the executive level.

Mozambican President, Mr Filipe Jacinto Nyusi, made the remarks on Wednesday, May 25, 2022,  at Ghana’s Parliament

The Miniority Whip in parliament,  Alhaji Muntaka Mohammed in his welcome address advocated for the establishment for free Trade within Africa. He said trading more within ourselves will make Africa’s independence more meaningful.

Mr. Muntaka said it was unfortunate that Northern Mozambique has being faced with Terrorism since 2017 but he prays they over this challenge.

However, the Majority leader  in parliament,  Mr Osei Kyei Mensah Bonsu called for Cooperation between both countries.  The Suame constituency’s Lawmaker  mentioned that, the benefits of both countries are huge and areas like  Agriculture.

He suggested relevant legislation should be encouraged between both countries to enable any future endeavours.

He revealed that, Ghana has established Ghana Mozambique Parliamentary society to enable follow up.

Previous The Government Is Reducing The Value Of Education In Ghana -EAI Report
Next Special Prosecutor: I Have The Evidence To Nail Former PPA Boss And His Brother-In-Law