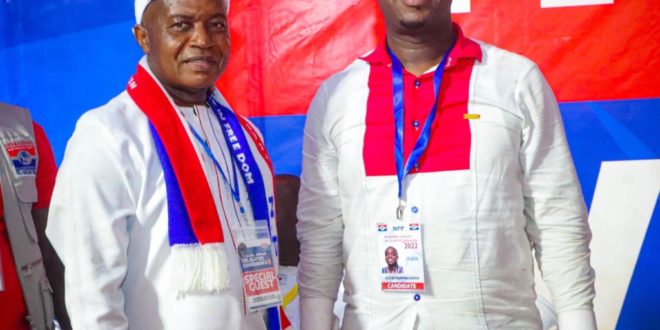 Spread the love
Yusif Adams writes
OPEN LETTER TO GENERAL SECRETARY AND NATIONAL NPP LEADERSHIP.
Dear NPP National Executives,
You have started on a good note. Your announcement to deter party executives from campaign in flagberear contest is a good call.
I however  want to remind you that killing apathy and  rejuvenating the base of our great Elephant party includes ban on open campaign for candidates by Executives but not limited to that. A lot more needs to be done else we can’t meet our expectations of increasing our parliamentary seats and winning the presidential election in 2024.
In our attempt to ensure that our members of parliament get full concentration to serve their constituents without distractions, some key officers in the party were tactically banned from contesting in our last parliamentary primaries.District Chief Executives,Secretaries and Chairpersons were given a difficult condition to quit their positions two clear years if they have interest in contesting in the parliamentary primaries. This decision helped to prevent them from sabotaging the mps and  pay attention to perfom their  duties. This was positive, it went a long way to keep the focus of the MPs towards executing their mandates to serve the constituents especially party grassroot members.
However,a very important group,the CEOs who should have been part of this ban were left of the hook and their activities and conducts adversely affected our campaign in 2024.
Most of the CEOs never used their positions to help the party grassroots. It’s obvious that when it comes to job opportunities the CEOs stand in a better position to help party grassroots even more than the MPs since most of the public sector jobs emanates from the institutions they head. In fact,when it comes to jobs mps rather plead with the CEOs for slots.
But what we witnessed in our first term and even now is that most of these CEOs hoard the jobs without given to the party people. There have been several complaints and allegations to the effect that most of these CEOs sell job opportunities to the highest bidders and deny party people. Their focus has always been to make more money in order to get the financial strength to contest parliamentary primaries so all opportunities that could have been given to party people end up falling into the hands of political neutrals and NDC folks.
In the 2020 Parliamentary primaries, we witnessed a very bad situation where these CEOs who did nothing at the Constituency to help the party and the grassroots wrestled power from the sitting MPs who had already spent time and resources serving the party and helping the youth in diverse ways. Most of them did the party great disservice with empty propaganda,corruption allegations and all manner of allegations against the mps because of their interest to unseat them. After the primaries it became difficult to market our mps to the general public for their votes and that contributed to our poor Parliamentary performance.
I wish to draw the attention of the General secretary and the rest of the national Executives that if indeed we are serious to break the 8 we must extend restriction to the CEOs against contest in our next parliamentary primaries as has been done to the District Chief Executives,Secretaries and the Chairpersons. Without them we still have very competent party folks who can contest in the parliamentary Primaries and win seats for our party.
For God,Country and NPP.
Yusif Adams.
NPP Communications Director, Asante Akyem South Constituency.
See also  NMC To Close Down Errant Radio Stations In Bawku
See also  Ashanti REGSEC On High Alert Over Planned Mayhem In Senior High Schools
See also  Asene-Manso-Akroso: MP Presents Medical Equipment To Health Facilities To Mark His Birthday

Disclaimer: Opinions expressed here are those of the writers and do not reflect those of TodayGhanaMedia.com . TodayGhanaMedia.com accepts no responsibility legal or otherwise for their accuracy of content. Please report any inappropriate content to us, and we will evaluate it as a matter of priority.

Previous Aburi Presby SHTS Teacher Crowned 2022 Most Outstanding Teacher.
Next A Retired Professor Of Education Calls For Review Of 1992 Constitution