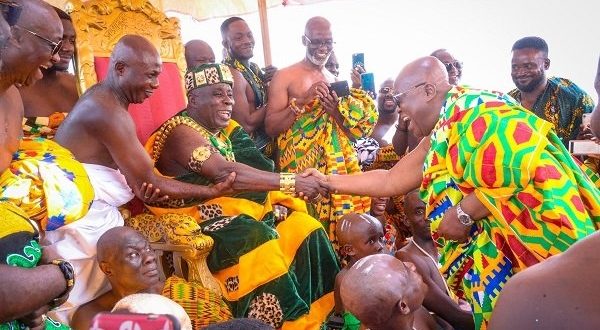 Okyenhene Osagyefuo Amoatia Ofori Panin has appealed to Ghanaians to support the building of the National Cathedral so it won’t be a disgrace to the President.

The chief said this at the Okyeman Council of State meeting held at Kyebi on Friday when the Board of Trustees of the National Cathedral visited them to appeal for funds to aid the construction of the project.

Speaking to the Board, the Okyenhene stated “He [Akufo-Addo] has to glorify the name of the Lord for how far He has brought him and build the cathedral to testify that he is grateful to God for making him President, there is no sweeter news as this.”

He noted that “with the cathedral, there’ll be no need to travel to Israel, just in Accra, the cathedral will answer all your questions about Jerusalem, Bethlehem, Nazareth and everything.

“So I’m pleading with you all, let us not bring shame upon our country and the President, let us contribute to build the cathedral,” he added.

The cathedral was a personal promise made to God by then-presidential candidate Nana Akufo-Addo if he won the 2016 election.

After winning and becoming President, he told Ghanaians the cathedral will be funded by the private sector and, therefore, called on religious bodies, organisations and individuals to contribute towards its construction.

In a U-turn, however, it was discovered in the 2022 budget that government has spent about GHS400million of tax payers’ money on the cathedral without parliamentary approval.

In the 2023 budget, some GHS80million has been allocated to fund the project despite the current economic crisis.

OccupyGhana, a pressure group, has recommended that the government suspend all public expenditures on the cathedral considering that the country is going through an economic crisis.

“Whatever arguments there might have been to support spending now-non-existent money on the proposed National Cathedral, have been eroded by the dire straits that the nation faces”, the group said in a statement.

See also  BoG: We Will No Longer Provide FX Support For Imports Of Rice, Poultry And others

“Our current situation makes the continued commitment in the budget to spend GHS80m on the cathedral, look like a vanity project”, it noted.

OG said: “We lose nothing by suspending expenditure on that project until the economy recovers”.

Previous Akufo-Addo To NLA: Be Transparent In Your Dealings
Next CETAG Members Vote To Continue Strike In Spite Of Ministerial Appeal