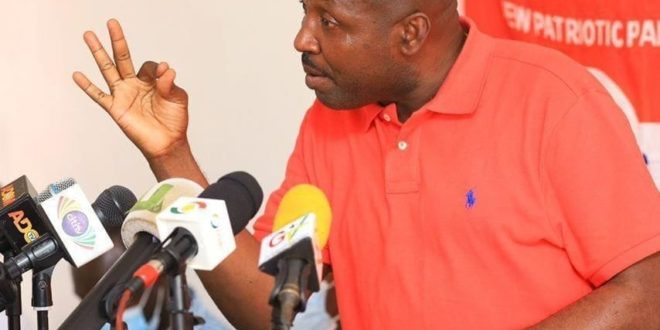 The incumbent General Secretary for the New Patriotic Party (NPP), John Boadu, has said that the party will make the same mistake they made in 2008 if they elected new faces for the national executive’s position in the upcoming internal election.

Mr. Boadu while speaking to Dawuro on Movement In The Morning Political Show on Wednesday 1st June 2022, said,  “I have made the General Secretary position lucrative to the extent that it appears very easy in the sight of many. I used my many years of experience and learning from the people who were ahead of me to make it very easy and I have reduced the position to an ordinary servant role making it look simple. However, it is one role that demands effective strategy, humility, and patience’’.

He further added that the position is reserved for people who can logically analyze issues.

‘’To put together rules and regulations comes with experience and strong analytical skills’’, he pointed out.

When he was asked why he should be retained, he said “I combined three positions at the time the party was going through a critical moment but we won power regardless. I moved our seat from 105 to 169 to win the Presidential elections and when I was formally accepted as the General Secretary, I won the Presidential election except for the parliamentary seat which was a bit reduced. I also led the introduction of the pink sheet tracking system which helped the party to release the election result six hours after the elections were over.

He disclosed that they will introduce a training Institute which will be chaired by Professor Mike Oquaye, the former speaker of parliament.

In his desire to maintain his General Secretary role, he says the party will make the same mistake they made in 2008 if they do not retain him.

“The party couldn’t break the 8 in 2008 because we introduced entire new executives- the Presidential aspirants and most of the other executives were all new. We can’t repeat the same mistake of having new people leading the party ahead of an election, at least some must be retained. This is why I am re-contesting, I want to take the party to victory come 2024’’, he stressed.

John Boadu was the Polling Station Chairman and Polling Agent for the NPP at the Korle-Bu Polling Station in Accra from 1996 to 2000. He became the Constituency Secretary of the Ablekuma South Constituency in the Greater Accra Region from June 1999 to November 2002. In 2002, he was elected the National Youth Treasurer of the Party.

He also became the Secretary-General of the Organisation of African Liberal Youth (OALY) between 2003 and 2006. Between  2006 to 2010 he became the National Youth Organizer and then the Deputy Director of Communications from 2011 to 2013.

Mr. John Boadu was elected as the National Organizer in 2014 and later became the acting General Secretary after Kwabena Agyapong, the then Secretary got suspended ahead of the 2016 general elections. In 2018, he was elected as the Chief Scribe of the party beating Richard Ahiagbah with 4,277 votes.  On Tuesday 31st May 2022 he declared his intention to re-contest to retain his seat.