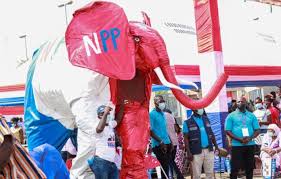 The governing New Patriotic Party (NPP) has appointed deputy national officers and directors to head various directorates of the party.

The names of the proposed officers will be presented to the National Executive Committee as well as the National Council, which is meeting today for ratification.

Below is a list of the positions and persons appointed.

The proposed names for the Deputy General Secretaries are Prof Haruna Mohammed and Dr. Antionette Tsiboe Darko, Executive Director of Danquah Institute and a lecturer at the University of Ghana.

The National Organiser, Henry Nana Boakye, will be supported by Joseph Kwawaja and a certain Chris Llyod as deputies.

Kate Gyamfua is having Mimi Duah and Hajia Safia Mohammed as Deputy Women’s Organisers while Salam Mustapha has Jay Hyde and a certain Sandra as deputy Youth Organisers.

Deputy NASARA Coordinators are Ali Suraj of the Office of the Vice President and another person yet to be named.

There is a new Director of Finance and Administration in the person of William Yamoah who replaces Collins Ntim Nuamah who lost the National Treasurer position to Dr. Charles Dwamena, aka Dr. China. Yamoah will be supported by two deputies.

The new Director of Communications is Richard Ahiagbah, a former Director of Danquah Institute who until recently was a deputy Director of Research at the Presidency.

His deputies are Kamal Deen Abdulai and Dennis Miracle Aboagye, who was earlier tipped to take over from Yaw Boaben Asamoah, and also Jennifer Queen of NADMO and Hajia Raabi.

Dennis is the new kid on the block when it comes to political communication.

There is a new Director of International Affairs, Kofi Ameyaw who is replacing Attafuah Danso, a former Youth Organiser.

President Nana Addo Dankwa Akufo-Addo, who rounded up his official visit to the north as well as Vice President Mahamudu Bawumia, are attending today’s crunch meeting which will decide on whether to reject the list or go ahead with the new appointments.