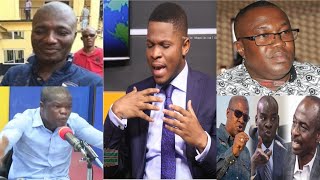 Popular serial caller of the opposition National Democratic Congress (NDC), Frank Kwaku Appiah popularly known as Appiah Stadium has started spilling beans of some members of the opposition political party who are in bed with ruling government.

He alleged that, the National Communications Officer of the National NDC, Sammy Gyamfi, took him along to some top NPP men to collect money.

Buttressing his claim further, according to Appiah Stadium, the Regional Communications Officer of the National Democratic Congress (NDC), Nurudeen Abass and Sammy Gyamfi went to collect money from a businessman in the Ashanti Region who is in the camp of Vice President, Dr. Mahamudu Bawumia’s called K.O.

In the audio in circulation, Appiah Stadium expressed worried about how Nurudeen Abass cannot keep secrets including how a journalist of Multimedia Group, specifically at Nhyira FM, Kwadwo Jantuah allegedly collected money from NDC to denigrate Nana Addo Dankwa Akufo-Addo led government and work for NDC.

“I have even called Sammy Gyamfi to tell him that, all his secrets are shared out by Abass. I told Sammy that, you went to this NPP man to collect an envelope, you went there at this specific time. Sammy Gyamfi was speechless on the phone” Excerpts of some of the secrets Appiah Stadium alleged.

He went further to expose Nurudeen Abass even where Alhaji Sana of NDC uses his party power to collect money from people.

Listen to the audio below