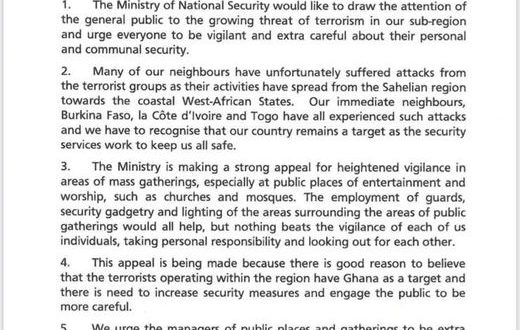 According to the statement signed by the minister of National Security, Hon Albert Kan Dapaah, said , “the Ministry of National Security  would like to draw the  attention of the general public to the growing threat of terrorism in the sub-region of the country and urge everyone to be vigilant and extra careful about their personal and communal security”

Ghana’s proximity to these countries (Burkina Faso to the North, Benin and Togo to the East and Ivory Coast to the West) exposes the country to extremist recruitment or attacks or both, it added.

Previous Healthy Heart Africa Africa Supports GHS To Combat Hypertension In Ghana.
Next Watch: How The Dismissed PPA Boss Cleared All The Funds In His “Frozen” Bank Accounts