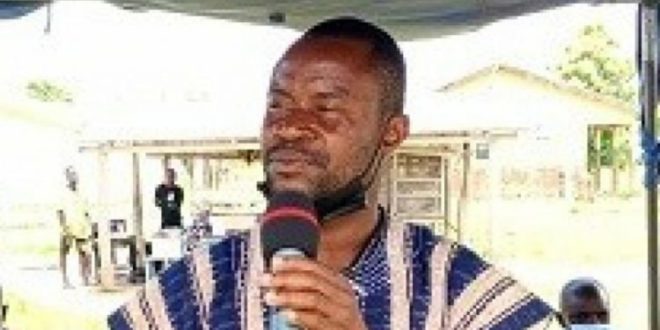 Information gathered  revealed that there were traces of sperms on the body of the late Krachi East Municipal Chief Executive(MCE) Francis Kofi Okesu.

The exhibit, according to information was found on the thighs of the late MCE during crime scene investigation.

A reliable sources disclosed that the Homicide Unit of the Ghana Police Service conducted the examination on the lifeless body upon their arrival.

This could indicate that the MCE was engaged in some sexual acts before his untimely death.

It was also revealed that the MCE took over the wheels of his official vehicle from his driver upon arrival in Kumasi for an unknown destination before report of his death.

Whilst he lodged in a Hotel near Kwame Nkrumah University of Science and Technology (KNUST), he lodged his driver in different hotel far from his place.

The incident was said to have occurred late Saturday September 3, 2022 but his body was found Sunday, September 4.

Prior to his demise, he was reportedly seen in a company of some people but was not seen on Sunday on the premises of the hotel until his driver purportedly raised an alarm.

Quickly, the police was alerted and they forcibly broke into the room and found the MCE lying naked in supine position on the bed as police are yet to establish any foul play on the body and the scene.
The purported lady who was said to have gone into the room with the MCE was nowhere to be found.

The body has since been conveyed to the morgue of the Komfo Anokye Teaching Hospital for preservation and autopsy.

Report indicates that there was attempt to cover up but was unsuccessful.

See also  ‘I Have No Doubt That The Truth Will Always Prevail’ – Haruna Iddrisu Disclaims Posts On Facebook, Twitter Handles

It was upon the driver’s waking up the next morning when he attempted to reach him but to no avail.

Meanwhile, in a statement released by the family of the late Hon. Francis Kofi stated that the public should disregard any reports concerning the death of the Krachi East Municipal Chief Executive(MCE). 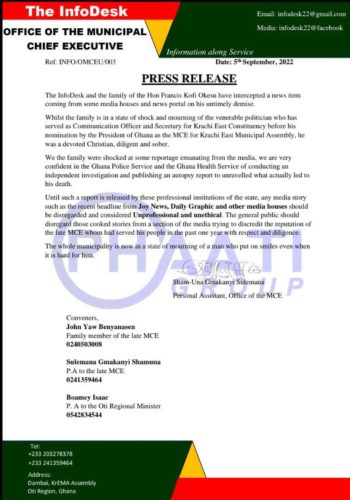 Previous Savannah Region: Unknown Assailant Kills Ambulance Driver At Mempeasem
Next “It Is Time To Turn Words Into Deeds, And Ambition Into Action” – Akufo-Addo