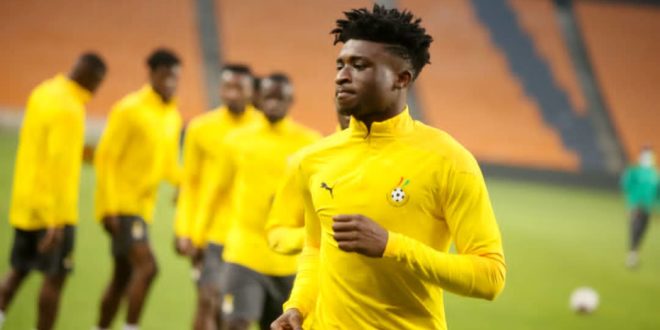 The Black Stars of Ghana head coach, Otto Addo is open to the idea of using Mohammed Kudus as a forward, but it would “depend on the games.”

Kudus is thriving in his new role as a false nine for Ajax, with the midfielder currently the Dutch champions’ most important player, scoring goals for fun. The 22-year-old has seven goals in all competitions, with six of those coming in his last five games.

Kudus has two goals in two Champions League games, including a screamer against Liverpool that silenced Anfield.

This has prompted suggestions that Kudus be used in a similar role for the Black Stars. In response, Addo has said he could implement it.

Coach Otto Addo is not surprised about the form of Mohammed Kudus as a false 9 at Ajax ,but admits he has a lot of thinking to do.

“He [Kudus] has more possibilities to play in several positions. We had this idea before. I also see him as a false nine but we also have very very good strikers. It depends on the games. He could be an option,” Addo said ahead of Friday’s game against Brazil.

Ghana will play Brazil in Le Havre on Friday before travelling to Spain to face Nicaragua on September 27.

Both friendlies are part of the team’s preparation for the 2022 World Cup in Qatar, where they will compete in the group stage against Portugal, South Korea, and Uruguay.

Previous Unpaid Nurses Go On Hunger Strike Sept 30
Next Black Sherif : My ‘Soja’ Song Was Initially Thrown Into The Bin