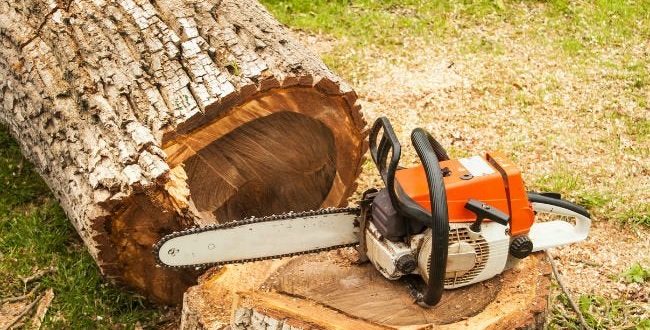 The Forestry Commission in the Eastern Region says, individuals who intend felling trees situated in or around their compound should seek permission from them before doing so.

Stressing that, It’s a crime to fell a tree without permit thus, an illegal chainsaw Operator when arrested could be jailed if found guilty of the law.

He has therefore advised illegal chainsaw operators to stop depleting the forest reserves or face their wrath.

Mr. Koomson indicated that issues of indiscriminate cutting down of trees in the region have become a major problems, with its negative impact on our society.

According to him, they have made efforts to protect the forest but were distracted by chainsaw operators, a situation he describes has been a headache in the area.

Meanwhile, In an efforts by the Forestry commission to restore Greener environment in the country, the Commission in the region has urged Ghanaians to play a part in the government’s “Green Ghana” project which was launched by President Nana Akufo Addo last year.

The Eastern Regional Senior Manager of the forestry commission irritated that this historic tree planting day, the first of its kind in our country is scheduled to take place on Friday 11th June, this year, he said.

Mr. Robert Koomson urged the people in the region and across the country to contribute to the success of the project by planting trees at their homes, farms and other locations.