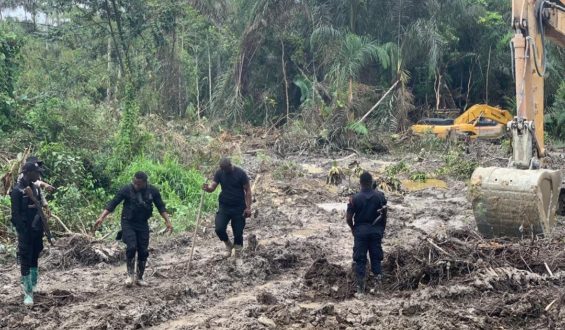 The District Chief Executive (DCE) of Ellembelle in the Western Region, Kwasi Bonzo, has called on the Ghana Police Service to apologise to him for defamation over circumstances that led to the disappearance of two excavators.

Mr Bonzo said he has been saddened by the turnout of events as he had no bad intentions and therefore cannot fathom why his name has been dragged into the mud.

According to him, the actions of the police were appalling, hence his demand for an apology from them for defaming him.

“They only wanted to lie to people that I was lawless which is not true. I was arrested by the police for videoing the found ‘missing excavator,” he cried.

Speaking on Asempa FM’s Ekosii Sen on Monday, Mr Bonzo said he only led the operation to the illegal mining site and therefore wondered why he was accused of engaging in illegal mining and being punished for no reason.

“I have been very sad throughout last week due to my case leading me to court. I am not here to blame anyone. I have been arrested twice on the issue of the missing excavators. All I wanted to do was to fish out those involved in the act.

“I was completely innocent about everything that happened and so when they arrested me, I told them the truth will prevail and indeed we found the excavators. I just don’t know why they keep dragging my name into the mud when my intentions are just clean. What do you think would have happened if we had not seen the excavators?”

On Wednesday, a team of operations and intelligence police officers in the Western Region retrieved one of the excavators that were reported missing in the Ellembelle District.

Play the audio below:

Spread the love Child marriage has been one of the unending challenges confronting many communities, …