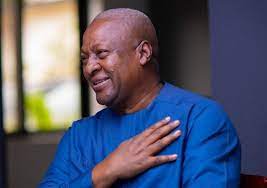 Ghanaians Were Unfair To Mahama – KKD

A Broadcast journalist who is also culture and tourism expert, Mr. Kwasi Kyei Darkwah (KKD) says Ghanaians were unfair to former President John Dramani  Mahama by voting him out in the 2016 elections.

According to him, Mr Mahama should have been given the benefit of the doubt since one term was inadequate to judge his capabilities as President.

“You need to give them time and usually, that time is a whole first term. So looking back now, I think Ghanaians were unfair to Mahama,” he told Benjamin Akakpo on JoyNews’ AM Show.

In his view, the said team failed to propagate the works of their boss, therefore, giving the then opposition side, New Patriotic Party (NPP) an upper hand.

“He [Mahama] didn’t speak much and he had a communications team that failed him. They were more interested in hearing their own voices than to speak about the work that man is doing,” he opined.

Ahead of the 2016 general election, the erstwhile Mahama administration was subjected to numerous criticisms due to the economic crisis at the time.

The then-opposition party, subsequently tagged him as ‘incompetent’ leading to his defeat at the polls.

But KKD said Ghanaians jumped the gun in attacking Mr Mahama, whom he described as his brother.

“So if we could victimise this president so much and now people in the NPP are calling me and I quote them, “We still love Nana Addo but his governance has made Mahama our saviour.””