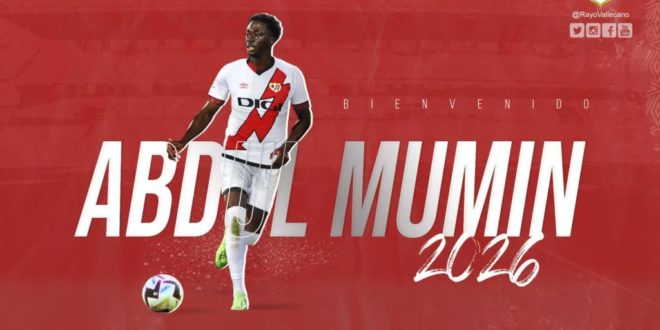 The 24-year-old signed a four-year deal to join the La Liga outfit from Portuguese side Vitoria Guimaraes.

“Abdul Mumin is officially a new Rayo Vallecano player for the 2022-23 season . He arrives from Vitória Guimarães SC. Agreement for four seasons. Welcome!,” wrote the club as they announced the arrival of the centre-back.

Abdul Mumin moved to Portugal in 2020 from Danish topflight side FC Nordsjaelland, going on to make over 60 appearances for Vitoria Guimaraes.

The Right to Dream Academy graduate was linked with Bournemouth in the summer transfer window, but the sacking of Scott Parker meant the deal could not go through.

Abdul Mumin was part of the Black Stars team at the 2021 Africa Cup of Nations in Cameroon earlier this year.

He also made the team for the World Cup qualifiers against Nigeria but he is yet to make his debut for Ghana.