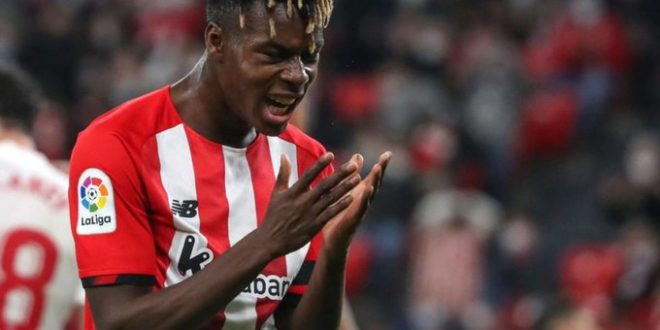 Ghana has missed out in the chase of Athletic Bilbao’s winger, Nico Williams after he earned a call-up to feature for Spain in the upcoming UEFA Nations League matches against Switzerland and Portugal.

This, comes at the back of the 20-year-old’s splendid performance for his club in the Laliga Santander this season.

Born in Spain to Ghanaian parents, the talented, skillful player was indecisive on which country to represent at the senior level after his recent visit to Ghana with his brother and teammate, Inaki Williams.

Nico Williams has been called up to the Spanish National team for their upcoming games against Switzerland and Portugal.

However, his recent call-up to the Spain national team means Nico has chosen Spain over Ghana, though he is still eligible to play for Ghana, provided he does not play more than three competitive matches at the senior level before turning 21, according to the amended FIFA rules on nationality switch.

Nico Williams becomes the 2️⃣nd player of Ghanaian origin to get a callup to the Spanish national team.

His brother Iñaki did so and switched to Ghana 🇬🇭 #3Sports pic.twitter.com/fk3ArVMDEU

The Athletic Bilbao winger has played for Spain U-18 and U-21 sides and is yet to honour his first call-up to the senior side.

The youngster would hope to make his debut appearance for the senior side to earn a call-up to represent Spain at the World Cup.

Meanwhile, his brother, Inaki Williams received his debut call-up in Coach Otto Addo’s squad for the international friendly matches against Brazil and Nicaragua in September ahead of the Mundial in Qatar in November-December.