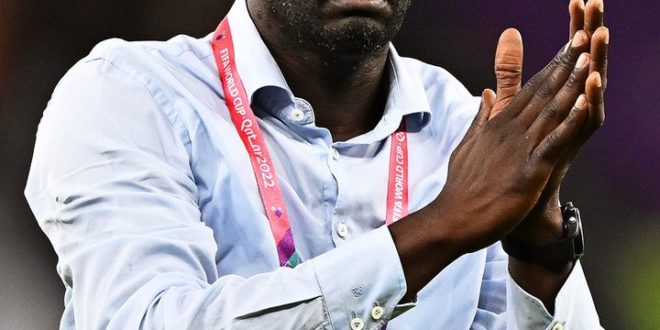 Ghana coach Otto Addo has resigned from his role as Ghana coach after his side’s exit from the 2022 FIFA World Cup in Qatar.

The Black Stars got knocked after losing 2-0 to Uruguay in the final group stage round, with his side only collecting two points.

A win for Ghana would’ve seen Addo’s side qualify for the knockout stages after they had beaten South Korea 3-2 and lost 2-3 to Portugal.

However, the defeat against Uruguay saw Ghana finish fourth in Group H, leading Addo to announce his resignation at the post-match press conference.

“It was clear that I would stop after the World Cup,” he said.

“Me and my family see our future in Germany and I like my role at Dortmund and I’m very, very happy there.

“So this is my decision.”

Otto Addo steps down as Black Stars head coach with a win rate of 33.3%.

JUST IN: Otto Addo steps down as Black Stars head coach with a win rate of 33.3%.#Qatar2022onMG pic.twitter.com/UhbYZcW6nb

Otto Addo has LEFT his role as head coach of the Black Stars.#FIFAWorldCup #Qatar2022onMG pic.twitter.com/KL81Box9Uf

Otto Addo when he realize both Ghana and Germany are out pic.twitter.com/kMut14Wd67

Otto Addo too, big man like you, you make ‘politics’ ruin your career like this? Give this current Black Stars team to any top coach in the world without interference and watch how we go ball to the whole wiase! Waste man!

Otto Addo’s time as Ghana 🇬🇭 coach has come to an end as he steps aside.

He also has a role of talent coach at Borussia Dortmund.

🗣️ I always said if we qualified for the World Cup I’d resign afterwards, even if we were World Champions. pic.twitter.com/obxDepRO1q

Otto Addo has resigned from Ghana Black Stars after failing to qualify the team to the knockout stage of the Qatar 2022 FIFA World Cup.

Ghana head coach Otto Addo has decided to resign from his role. His chapter as Ghana manager is now over. 🚨🇬🇭 #Qatar2022

The decision has been made as Otto Addo will continue as assistant coach at Borussia Dortmund. pic.twitter.com/d6RtbeLgHi

Otto Addo had told Ghana FA he’d not continue with the Black Stars regardless of the outcome at the World Cup.

Several team officials telling me he has confirmed he is leaving the post.

He prefers to continue with Dortmund. pic.twitter.com/RaL6oVuuCe