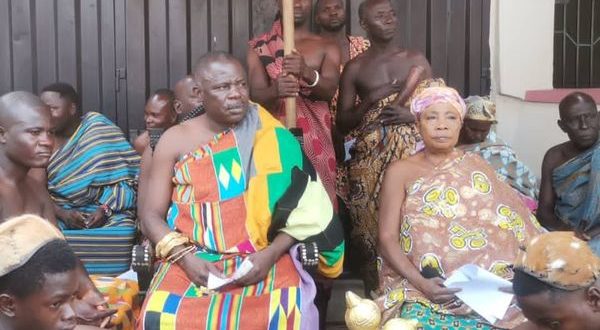 The Chief of Ejura Traditional Area Barimah Osei Hwedie II has praised the vice President of Ghana Dr Alhaji Mahamadu Bawumia for initiating a GH¢15 million water supply project for communities in the Ejura-Sekyedumase Municipality of the Ashanti Region.

According to the chief, Dr Bawumia after learning that communities in Ejura have low access to quality water promised government’s intervention.

The project, being financed by Government of Ghana with suport from German Bank is aimed at supplying clean water to over 41,000 poeple in Ejura Township and its sorrounding communities.

Expected to supply over 10,000 cubic metres of water daily to Ejura households, the water supply project forms parts of government efforts to imporove access to potable water and sanitry conditions in the area.

He was particularly grateful to the vice president of the republic of Ghana Dr Alhaji Mahamadu Bawumia for constantly coming out with projects to help the larger population of the country particularly Ejura residents.

“Their administration has touched virtually every sector of the Ecomony as far as Ejura residents are concerned and will forever be indepted to their exceptional leadership “. He said.

Barimah Osei Hwedie II however disclosed that the existing water supply system at Ejura which was constructed by residents 20 years ago has not been operational due to a number of factors, resulting to poor accesss to potable water.

“Due to these difficulties as well as considerable increase in population growth, the traditional council has teamed up with government
to construct a befitting water supply system to meet water demands of Ejura Township and its surrounding communities”. he said

He added that Dr Bawumia has touched the lives of Ejura Residents in an unimaginable ways for pushing for the construction of this important water supply project.

He reiterated his traditional council’s commitment to accelerate the development of Ejura Communities.

He however called on all and sundry to support the project to make it a reality.

For his part, the Municipal Chief Executive for Ejura-Sekyedumase Hon Dr Kingsley Osei said the project is estimated to supply water to 41,000 people with an average demand aboit of Ten Thousand (10,000) cubic metres of water daily.

He disclosed that the project when completed will have an ultramodern office complex for managers of the facility, 51 kilometres distribution and transmission pipelines, 40 standpipes, 12 mechanised boreholes, and a one high level tank.

He was optimistic that the project will improve living standards of the people and promote good hygiene in the area.

He entreated the beneficiaries to help guarantee the sustainability and protection of the infrastructure.