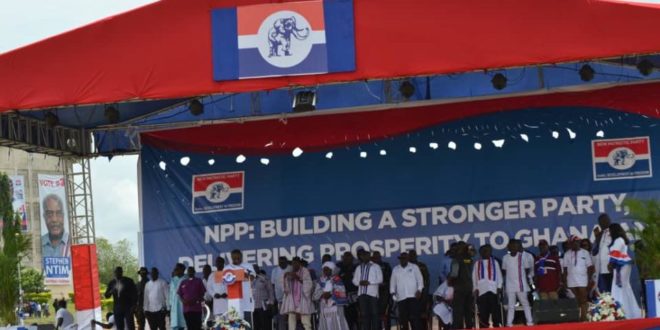 Country risk and industry research service organization, Fitch Solutions, is predicting that current divisions in the ruling New Patriotic Party (NPP) will cause political risk in Ghana to increase over the coming months.

The prediction is contained in an article published by the rating agency on 14 November 2022 entitled ‘Division within Ghana’s Ruling Party to Weigh on Political Stability’.

According to the analysts who specialise in short- and long-term political and geopolitical risks globally but with emphasis on Ghana, the Fitch Solution article notes in its key views that political risk in Ghana will increase over the coming months due to growing division within the ruling party.

“Indeed, an 80-member faction within the ruling New Patriotic Party opposed to Finance Minister Ken Ofori Atta could paralyse policymaking in order to pressure President Nana Akufo-Addo into replacing him.

“The government will face additional pressure from more frequent protests and industrial action in light of a likely IMF programme,” the Fitch Solution article noted.

“The 80 NPP Members of Parliament (MPs) that want the Finance Minister to be replaced are likely to increasingly put pressure on Akufo-Addo to do so. Indeed, we believe there is scope that this faction could abstain from voting or vote against the NPP’s legislations,” the Fitch opinion further indicated.

“Given that the ruling party does not have a clear majority in Parliament,” Fitch Solution, is of the opinion that this would “effectively paralyse the already slow policy-making process and delay necessary fiscal reforms as well as Akufo-Addo’s wider political agenda.”

According to the Fitch Solution article, public discontent will grow further amid weakening economic conditions. The government, Fitch observed, “will face additional pressure from more frequent protests and industrial action.”

“Worsening living standards amid rising consumer prices – inflation reached 40.4% y-o-y in October 2022, the highest reading since 2001– and tighter monetary conditions have led to a 72.7% q-o-q increase in protests and riots across in the country.

“The country has also seen large industrial action in recent months, including a three-day retail strike in Accra in October. Given that inflation is primarily driven by currency weakness, we expect price growth to remain elevated in the months ahead,” the report from Fitch Solutions Country Risk and Industry Research indicated.

On the weakening of the Cedi, the report noted that “significant capital and financial account outflows caused by weakening investor sentiment will continue to weigh on the currency.”

“Our view is further informed by the fact that previous periods of significant exchange rate weakness in Ghana all lasted roughly 12-14 months suggesting that the cedi will continue to depreciate into the Q123 (the current sell-off started in January 2022)”.

“This will keep inflation high, weighing on living standards and eroding support for the government,” the Fitch article read.