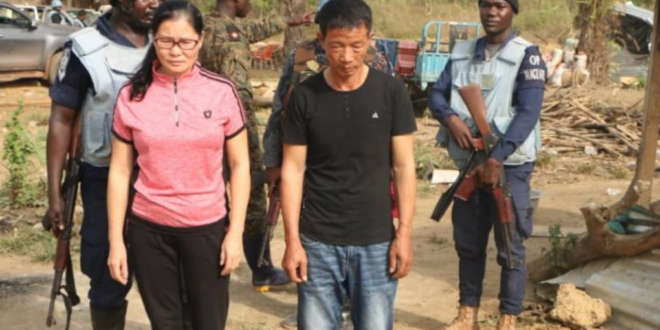 Chinese Embassy To Ghana’s Gov’t : Safeguard The Legitimate Rights Of Our Citizens

The Chinese Embassy has broken its silence on the recent arrests of some Chinese citizens engaged in illegal mining.

In official remarks by the Embassy Spokesperson on the issue, the Embassy said the Chinese government has “always requested Chinese citizens overseas to abide by the laws and regulations of the host country”.

It added that it “firmly opposes Chinese citizens to engage in any illegal activities in any country and supports the Ghanaian government to fight against illegal mining according to the law”.

Backing moves by the Ghanaian government to enforce its laws, the Embassy asked that the legitimate rights and interests of Chinese citizens are fully safeguarded.

These remarks come in the wake of the arrest of Chinese businesswoman En Huang, popularly known as Aisha Huang.

She was arraigned before an Accra Circuit Court on Monday on charges of mining without a licence, and engaging in the sale and purchase of minerals without a valid licence.

She had been found guilty of similar offences in 2018 but the Attorney General, then, filed a nolle prosequi on the case, agreeing to deport her to her home country.

However, she is said to have returned to Ghana on a Togo visa but was identified through intelligence by the security agencies.

She faces a two-year jail term per the regulations of the Ghana Immigration Service.

She will reappear in court on Wednesday, September 14.