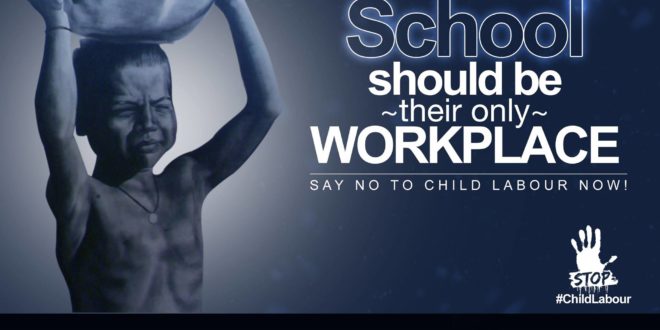 Child Labour And Child Trafficking On The Rise, Let’s Create Awareness To Reduce It – Ghanaians Advised

The Bono regional officer for the General Agriculture Workers Union (GAWU) Mr. Pascal Ajongba Kaba has revealed the high rate of child trafficking and child labour across the globe hence calling for immediate awareness creation within the country to ameliorate the canker.

Speaking at a one day workshop at Sunyani organized by ActionAid Ghana in collaboration with General Agriculture Workers Union which is financially supported by Nowegian Agency for Development cooperation(Norad) with the theme: Combating modern day slavery in Ghana, a shared responsibility, Mr. Pascal indicated that, modern day Slavery is an issue which is predominantly recorded in the cashew production Value change such as the Jaman North, Jaman South, and Tain districts, therefore awareness creation is an important measure to help address the issues of modern day slavery and human trafficking.

He called on the Bono regional coordinating council, the municipal and district chief executives and traditional authorities to help in the prosecution of perpetrators and assist victims to seek justice to deter others from repeating the same indicating that child labour and child slavery is largely recorded within the Jaman North, Jaman South and the Tain districts hence authorities within the targeted districts much work in their power to prevent, protect, prosecute and partner with relevant stakeholders to avoid modern day slavery.

On her part, Nana Akua Ferkaa III the queen mother of Faaman, a community within the Jaman South Municipal who doubles as the Drobo Abakomahemaa indicated that child labour is crucial in the cashew growing areas which sometimes affect the education of most youths within the catchment areas.

She therefore pleaded with the education ministry to lessen the child right campaign that prevents teachers from punishing undisciplined students to improve discipline in schools indicating that, most school going children within the final year stop school to participate in cashew farms for money which also contributes mainly to the child labour hence giving teachers the green light to punish victims will serve as deterrent to others.

She added that, Nananom are on course to offer the necessary education to parents, guardians and students on the need to be proactive in their education to prevent high rate of child labour within the targeted districts.

Finally, Mr. Duayah Peter, Bono regional Officer of the department of Social Welfare pleaded with government and stakeholders to provide the Bono department with shelter to accommodate teenagers who may be adopted by the Department as a result of child labour and its related matters.